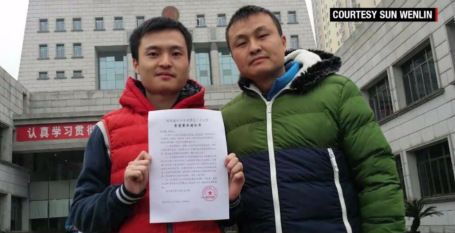 Sun Wenlin and his partner Hu Mingliang have had their challenge of China’s same-sex marriage policy rejected, dealing a blow to China’s campaign for LGBT equality.

The pair sought to sue after their application for a license was rejected last summer. To their surprise, in January he case was accepted by a district court in Changsha, the capital of Hunan province.

The pair and their lawyer argued that the Sun and Hu had a right to marry and there was no explicit ban on same-sex marriage in the country.

In ruling against the case Wednesday, the court pointed out every mentions of specific genders in China’s Marriage Law, which came into effect in 1981.

Shi Fulong, the couple's lawyer, said he felt "disappointed and saddened,” but that “the gay rights movement has gone from being underground to being in the open thanks to an increasingly tolerant public," he said.

Sun vowed to continue fighting for LGBT equality and told CNN "We will appeal this decision and keep fighting for our rights, what we want is not just a sheet of paper or the recognition of some strangers -- this is about freedom and equality."

Homosexuality was decriminalised in 1997 in China and taken from the official list of mental illnesses in 2001.