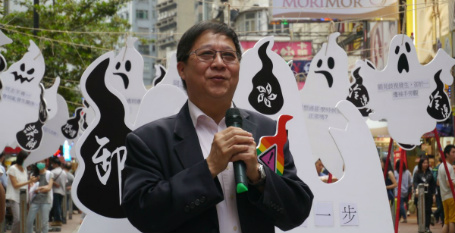 In his first appearance at an LGBT-related occasion since assuming office in April, Chan attended an event on Sunday to mark the International Day Against Homophobia, Transphobia and Biphobia (IDAHOT).

Chan said that the groups’ demands for public consultation on discrimination legislation within a year were reasonable but that they should first allow the new Chief Executive to settle in.

The theme of the event was “exorcise the homophobic ignorant ghosts” and was organised by local activist groups including Rainbow of Hong Kong, Gay Harmony and Women Coalition of HKSAR.

The new head of Hong Kong’s equality watchdog expressed a hope to clarify his stance after he failed to convince the LGBT community of his dedication to equality in his first few days of office.

Chan commented on the theme of the event and said that discrimination often stems from ignorance, for example the belief that equality for sexual minorities means the destruction of traditional family values. “If we turn this ignorance into being informed, then discrimination also turns into mutual respect,” he said according to RTHK.

He also noted that the Government should step up their efforts to legislate against discrimination of sexual minorities and that the report EOC submitted to the government – which had been commissioned under his predecessor, Dr York Chow Yat-ngok – had already expressed a need for legislation.