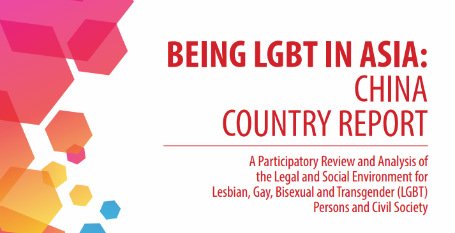 ‘Being LGBTI in China’ report released

The results of a massive survey by the United Nations Development Programme (UNDP) on being LGBTI in China have been released in Beijing to mark International Day Against Homophobia and Transphobia (IDAHOT).

The report is based on a survey of 30,000 respondents from all provinces in China conducted by UNDP, Peking University Sociology Department and the Beijing LGBT Center depicts the everyday lives of LGBTI in the country.

It covers areas such as the legal environment, education, employment, family, access to health service, mental health, media, social services, faith and other areas, especially in terms of discrimination and unfair treatment suffered by sexual and gender minorities as well as social attitudes towards them.

The report finds that only 5% of LGBT in China are able to live openly with their sexuality. It claims that out LGBT face discrimination and abuse within their families, their schools, and their workplaces.

It also states that access to health and social care is difficult for LGBT in the country, particularly those with HIV who continue to face hurdles in accessing prevention and treatment services as well as stigma-free psychosocial support and counseling.

The report also reveals how quickly attitudes are changing in China. It shows that young people are quite accepting of sexual and gender diversity and that society’s rapid change offers an opportunity for LGBT to achieve equality.

“LGBTI people represent some of the most marginalized and vulnerable populations in Asia and the Pacific, including China,” said Agi Veres, Country Director of UNDP China. “Attention to their needs is therefore essential if we are to achieve the Sustainable Development Goals, a key feature of which is the underlying principle and commitment to ‘leave no one behind’.”