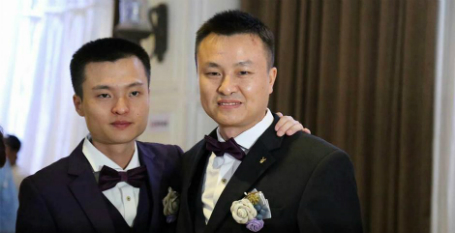 After losing their challenge of China’s marriage laws last month, a same-sex Changsha couple hope that their wedding this week can be the first of many in the country

Sun Wenlin and Hu Mingliang exchanged vows at a Tuesday afternoon in the central Chinese city of Changsha, Hunan province.

The pair made international headlines last month when their challenge of China’s same-sex marriage policy was rejected, dealing a blow to China’s campaign for LGBT equality.

The pair sought to sue after their application for a license was rejected last summer. To their surprise, in January the case was accepted by a district court and their lawyer argued that the Sun and Hu had a right to marry and there was no explicit ban on same-sex marriage in the country.

Shi Fulong, the couple's lawyer, said of the ruling at the time he felt "disappointed and saddened,” but that “the gay rights movement has gone from being underground to being in the open thanks to an increasingly tolerant public," he said.

Sun vowed to continue fighting for LGBT equality and told CNN "We will appeal this decision and keep fighting for our rights, what we want is not just a sheet of paper or the recognition of some strangers—this is about freedom and equality."

Tuesday’s ceremony was attended by friends, family, well-wishers and the media. The two men declared their love for one another and after speeches, they were presented with an imitation wedding certificate by Hu’s father and Sun’s mother.

Sun’s mother told the crowd she encouraged other gay people to fight for their rights. “Be brave and tell your families that you are gay!” she said.

The newly-wed couple signed a rainbow flag and serenaded the audience with the ballad “Rainbow,” by Taiwanese singer Ah Mei.
Sun and Hu announced that they hoped to organize more gay weddings around the country for other couples so that people don’t see gay marriage as something unusual.

“I hope everyone in society, including government officials, will understand what homosexuality is,” Sun told Sixth Tone. He has quite his job to set up a same-sex wedding planning organisation.