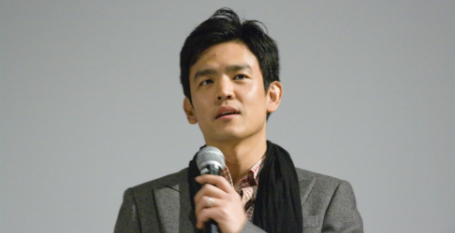 The American actor with Korean heritage, who plays Sulu in the film, says that a welcome home kiss between Sulu and his partner was edited out of the final version.

The Sci-Fi sequel has created quite a lot of entertainment chat in recent weeks with the revelation that the character of Sulu, played by John Cho, has a daughter with his male partner.

However, in an interview with Vulture, Cho has revealed that an intimate scene between Sulu and his partner was removed in the final cut of Star Trek Beyond.

“There was a kiss that I think is not there any more,” Cho said in the interview. “It wasn’t like a make-out session. We’re at the airport with our daughter. It was a welcome-home kiss. I’m actually proud of that scene, because it was pretty tough.”

The decision to address Sulu’s sexuality in the film has met with mixed response from fans and film stars. George Takei,who played the character in Gene Roddenberry’s original TV show, said that while he welcomed an LGBT character in Star Trek he didn’t agree with altering the character of Sulu.

“While I understand that we are in an alternate timeline with the new Trek movies, for me it seemed less than necessary to tinker with an existing character in order to fulfil Gene’s hope of a truly diverse Trek universe,” he said in a Facebook post.

Simon Pegg, co-writer of the script, defended the handling of Sulu’s sexuality. “One of the reasons why we made it an existing character [is] because it felt like part of the fabric. If the story evolves in the next film to feature his personal relationship in some way then of course it will, but if it doesn’t then it won’t because it’s all about the good of the story rather than doing it for the sake of it,” Pegg said.