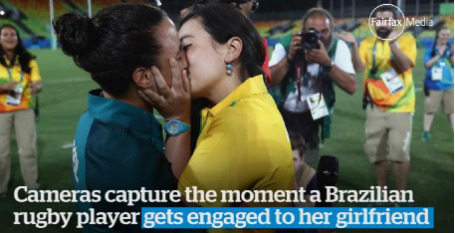 Cerullo became the first athlete to receive a marriage proposal at this year’s olympics when her girlfriend, Marjorie Enya, asked her to marry her after the medal ceremony following the women’s rugby sevens final.

Enya gave an emotional speech before the couple embraced. “As soon as I knew she was in the squad I thought I have to make this special,” Enya said. “I know rugby people are amazing and they would embrace it.”

“She is the love of my life,” Enya told the BBC. “The Olympic Games can look like closure but for me it’s starting a new life with someone. I wanted to show people that love wins.”

The couple have been together two years.