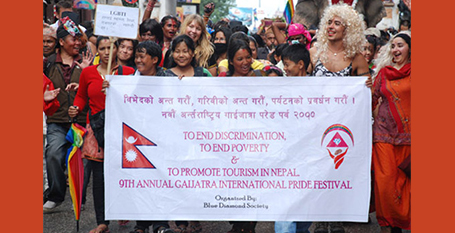 Hundreds of LGBT march in Kathmandu

Nepal’s pride parade took place on Friday. It has been held for the past few years on Gaijatra, a Hindu festival to remember the dead, in which people cross dress.

Participants told the Associated Press that they were marching as they still do not have equal rights despite a constitutional ban on discrimination based on sexuality.

Among the banners carried by LGBT and allies, one said “We should not be deprived of our rights. We demand implementation of the rights guaranteed by the new constitution.”

U.S. Ambassador to Nepal Alaina B. Teplitz, joined the parade.