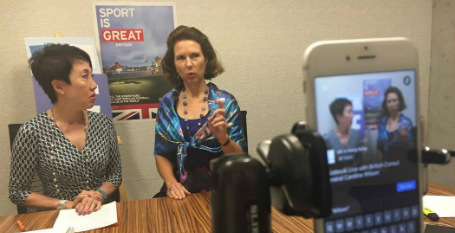 In a Facebook live Q & A, British Consul-General Caroline Wilson answered questions on her four-year tenure in the city

During the session Wilson touched on a number of LGBT issues.

“It’s one of the things that surprises me, honestly, in Hong Kong, is there is still discrimination here – and we have worked really hard in the past four years and I am sure my successors, my team, will continue to do so to outlaw all forms of discrimination,” she said.

The host praised Wilson for the consulate being one of the highest-rated LGBT inclusive workplaces in Hong Kong.

Wilson noted that a rainbow banner will be displayed outside the consulate-general during Hong Kong’s pride event in November.

Wilson also mentioned the progress in same-sex marriage ceremonies for British citizens being permitted at the consulate.

“We have yet to have any progress but we’ve been working very hard at it – we can only conduct these ceremonies if there is no objection from the host government,” she said.

“And unfortunately our host government is not happy and have objected to us conducting same-sex marriages, so it’s an issue we’re going to continue pursuing.”