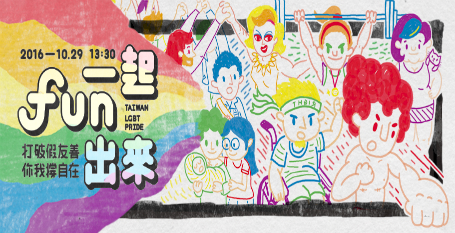 A new push for same-sex marriage in Taiwan’s parliament this week is the perfect build up to the largest LGBT pride parade in East Asia.

Taipei’s annual pride parade is expected to draw tens of thousands of participants and spectators to the city’s streets on October 29.

The theme of this year’s parade is “Fun together,” and parade organisers have encouraged parade goers to “honor diversity, like you mean it.”

The parade starts from Kaidagelan Blvd at 13:30 and snakes around the city before arriving back at the start point where speeches are held.

Now in its 14th year, it is the highlight of a week of LGBT events in the city.

Organizers said that last year’s parade drew 80,000 people and are hoping to match or beat this number on Saturday.

Earlier this week Taiwan moved closer to becoming the first country in Asia to legalise same-sex marriage after the country's ruling Democratic Progressive Party (DPP) proposed an amendment to the country’s Civil Code on Monday.

Watch some footage of 2013’s event to get yourself in the mood: