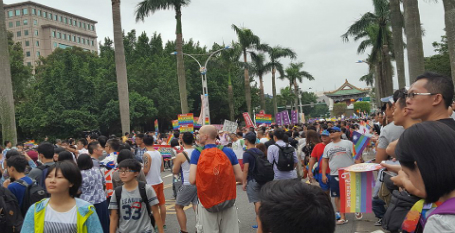 Thousands of LGBT and their supporters took to Taipei’s streets on Saturday with the theme “Fun Together, Honour Diversity,” although many marchers said they were marching for marriage equality.

Organisers Taiwan LGBT Parade said approximately 82,000 people took part in the march, up from 78,000  last year. The first parade was held in 2003.

The march kicked off at 2.30pm with huge rainbow banners unfurled and a brass band playing. "Homosexuality won't destroy the world, ignorance will," read one of the many placards.

President Tsai Ing-wen has openly supported marriage equality and said in a statement released Saturday that she would respect any decision reached by parliament.

“Even though my role has changed, my values remain unchanged,” she wrote on her official Facebook page, referencing her voicing of support last year.

Taiwan’s Justice Minister, Chin Tai-san said that the new government had a clear position on same-sex marriage and backed equality.

“The call for marriage equality feels stronger than last year,” one marcher, Corinne Chiang, told the Guardian. “We hope same-sex marriage can be realised as soon as possible so our child can have two legal mums.”

Although no resistance tat the march itself was reported, an anti-gay marriage group made more than 2,000 calls to the Taipei City government's service hotline to condemn the march.

Taiwan LGBT Pride said this was a "huge waste of government resources."

Watch some footage of the parade below: