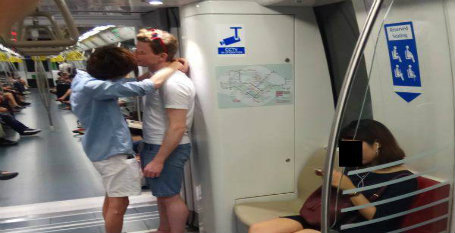 Post with photo of gay kiss and labelling it “simply disgusting” is shared over 80,000 times.

A secretly snapped photo of a gay couple kissing on Singapore’s subway has gone viral and sparked an anti-gay campaign against the couple.

A Singapore woman, known only as Melinda, took the photo and posted it alongside a hate-filled rant in which she said “What if my children saw this and asked ‘Mummy, why are the two men kissing?’”

“Would I have to answer "It's the same as normal love and marriage. The only difference is that one man opens his buttocks for the other man to put his private part inside but in the end, no babies come out. They only get AIDS”?!”

One half of the couple, Australian man Peter Eggenhuizen, told Star Observer that he felt mortified and violated to see the image and article go viral.

“To rub salt into the would, the author went on to attack my act of love and affection,” Eggenhuizen said. “But I feel the need to rise above it and raise awareness that this is unacceptable.”