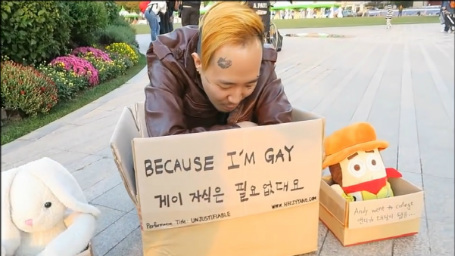 Heezy Yang performs ‘Unjustifiable (Because I'm Gay)’ on the streets of Seoul to bring awareness of LGBT youth.

In his performance, Heezy Yang sits in a large cardboard box alongside a row of smaller cardboard boxes occupied by a stuffed animal.

One sign states, "They have too many pets." Another sign says, "They don't want a one-eyed rabbit." Yang himself is holding a sign that reads “because I'm gay."

"I do 'Unjustifiable' to bring awareness of LGBTQ homeless youth, or LGBTQ youth who are in need of help in general," Yang Told NBC News.

"I wanted to tell people that there are people abandoned, just like animals," Yang said. "People are abandoned too. And the reason is their sexuality."

"I think it is an important time as a queer person in Korea," Yang said. "Change is happening and we have to fight and bring awareness, and I think I can do that with my art. And I'll do it until I get sick of it or they don't need me anymore."