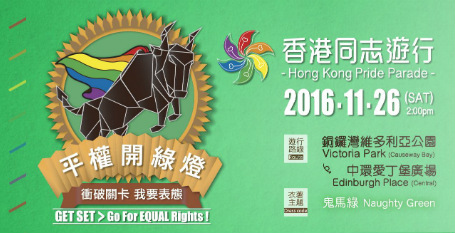 The theme of the Hong Kong Pride Parade 2016 is "Get set, go for equal rights!"

The march kicks off from Causeway Bay’s Victoria Park at 2pm and will finish at Edinburgh Place with performances and speeches. An after party has been organised at Wellington Street’s Kee Club.

The green traffic light has been taken a symbol for this year’s parade.

“In Hong Kong, there has been so many "red lights" on the path towards LGBTQ equal rights. We believe voicing out loud for equality would help turning the red lights to green, and by delivering our message, we shall be able to engage a bigger crowd to join us,” said organisers.

“Time has come again for us to fight against discrimination. The Equal Opportunities Commission announced early this year that more than half of Hong Kong citizens, in which more than 90% are young adults, are in support of enacting anti-discrimination laws for sexual minorities. The citizens of Hong Kong have spoken, who is there to stop the red light from turning green?”

Last year’s event had the theme 'Yell Out for Equality,' and more people than ever joined the march with organisers estimating numbers at around 10,000. Watch some footage of last year’s event below: