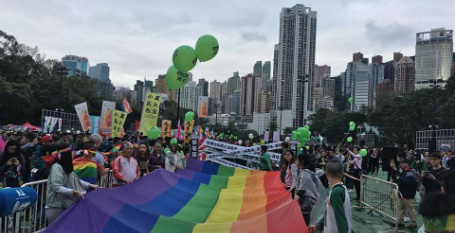 Wind and rain did not stop Hong Kong’s LGBT community from demanding equality with a march through downtown Hong Kong last Saturday for the eighth annual Hong Kong Pride Parade.

The annual pride parade took the theme of “Get set, go for equal rights!” with the green traffic light used as a symbol for progress. “In Hong Kong, there has been so many ‘red lights’ on the path towards LGBTI equal rights,” the Hong Kong Pride Parade Committee said.

Oganisers reported that 6,800 people attended while police put the number closer to 2,500.

Among them were pro-LGBT lawmakers including Hong Kong’s first openly gay lawmaker Ray Chan. “After decades, we still do not have anti-discrimination laws and marriage equality is still far away,” he told AFP.

In a speech at the end of the march, the chairman of the Equal Opportunities Commission called on whoever is elected the city’s next chief executive in March to push forward sexual orientation discrimination laws.

“I would hope that after March the government would promise to hold a consultation on the issue, and hopefully by the end of next year we would have a drafting committee,” Chan said. He said progress on the issue had been slow so far, but he saw “encouraging” signs.