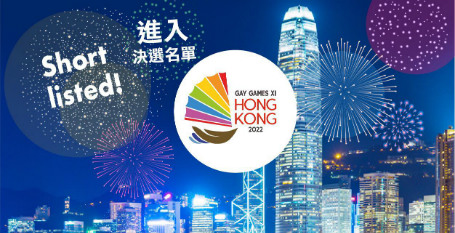 A delegation from the federation of Gay Games—often referred to as the "gay olympics"—will conduct a site visit to Hong Kong in May after naming the city a shortlisted candidate last week.

Hong Kong joins Guadalajara in Mexico and Washington DC in the United States in the final three.

"Hong Kong is the perfect city to represent Asia," Dennis Philipse, co-chair of the Hong Kong bid team, said. "Asia is home to an estimated 221 million LGBT+ people, but also where there is an ongoing struggle to overcome homophobia and gain acceptance."

The Hong Kong bid team has received support from the Equal Opportunities Commission, the Tourism Board and father of Lan Kwai Fong and entrepreneur Allan Zeman.

"The Gay Games is much more diverse than an 'Olympics' per se as it is also a ­festival that includes arts and ­culture and a conference," bid team co-chair Benita Chick told the South China Morning Post:  "The mission is to further promote diversity and inclusion by welcoming participants regardless of their ability."

The Tseung Kwan O Sports Ground, Victoria Park swimming pool, and the Kai Tak Cruise Terminal are all listed as key venues in an event that is expected to bring HK$1 billion into the city, due to the 15,000 athletes estimated to participate and the 40,000 visitors expected to attend.