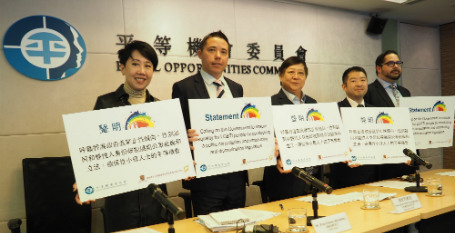 More than 75 organisations, businesses, and academics sign statement demanding discrimination based on sexuality or gender identity be criminalised.

Hong Kong’s Equal Opportunities Commission (EOC) and the Gender Research Centre (GRC) of the Hong Kong Institute of Asia-Pacific Studies at The Chinese University of Hong Kong (CUHK) issued a joint statement on Friday calling for the government to launch a public consultation and introduce legislation against discrimination on the grounds of sexual orientation, gender identity and intersex status as soon as possible.

The statement was supported by 75 other organisations including financial institutions, global companies, law firms, chambers of commerce local and international NGOs, religious groups, and academics.

“We firmly believe that anti-discrimination legislation is needed to truly safeguard their rights to be treated equally,” said Professor Alfred Chan Cheung-ming, Chairperson of the EOC, at the press conference.

He pointed to a study by the EOC and GRC released a year ago that found LGBTI people in Hong Kong experience discrimination in employment, education and the provision of services and that public opinion had visibly shifted in favour of legislation—over 55% of the general public and over 90% of the young population (18 to 24 year olds) were in support.

“Offering the LGBTI communities better legal protection is more than just a moral and human rights obligation. It also makes business sense, as emphasised by the groundbreaking support for legislation by many organisations working in the business sector,” he said.

Legal Counsel for the EOC told Fridae that the next step will be to discuss discrimination legislation with Hong Kong’s next government which comes into power in July.