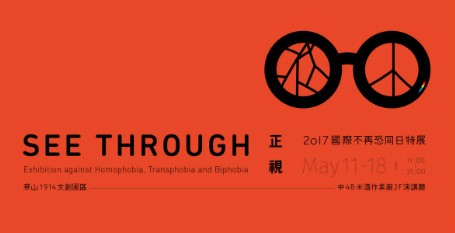 Exhibition in Taiwan’s capital will showcase the country’s history of gay rights to mark the International Day Against Homophobia, Transphobia, and Biphobia.

An exhibition featuring the challenges faced by homosexuals in Taiwan and the history of their fight for marriage equality will launch in Taipei later this month to mark the International Day Against Homophobia, Transphobia and Biphobia (IDAHOT), the organizers said Wednesday.

The exhibition is scheduled for May 11-18 at Huashan 1914 Creative Park in Taipei, according to the the Taiwan Alliance to Promote Civil Partnership Rights, a Taipei-based same-sex marriage civic group.

The exhibition will include photos, videos, and other artefacts related to the march towards LGBT equality in Taiwan, as well as telling the stories of the country’s homosexuals who have been unable to marry.

It also features the story of renowned Taiwan gay rights activist Chi Chia-wei, who is one of the activists bringing the gay marriage case to court as unconstitutional.

Organisers hope the exhibition will encourage greater dialogue on the gay rights issue at a time when same-sex marriage is being discussed in both the legislature and the judiciary.