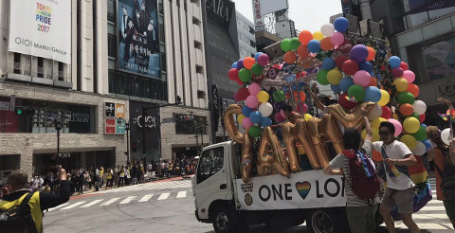 An estimated 5,000 march for LGBT equality in in Japan’s capital city Tokyo

Thousands of LGBT marched through Tokyo’s Shibuya district on Sunday, the culmination of the city’s Tokyo Rainbow Pride event which has seen a number of LGBT events in the city over the past week under the theme “change.”

“I believed that nothing would change. But, little by little, things are starting to change,” the event’s flyers say. “Let’s achieve a future where everybody is respected as an individual, despite differences in their sexuality.”

Watch some of the marchers below: