Singapore's Senior Minister of State for Health, Dr Balaji Sadasivan, told lawmakers on Wednesday that the Nation parties, which has been held annually since 2001, could be linked to the HIV upsurge among gay men in the country. He warned of an AIDS epidemic as the total number of new cases rose 28 per cent in 2004 reaching a high of 311 from 242 the year before. He reported that 90 per cent of new patients being men and a third of them being homosexual. 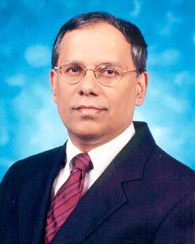 Dr Balaji's efforts in fighting HIV/AIDS has not gone unnoticed, he is one of the winner's of the 2004 Just Shut Up Awards - as seen on the highly respectable thebody.com, a HIV/AIDS resource web site - for 'blam(ing) gay men for the spread of HIV and claim(ing that) nongovernmental agencies like Action for AIDS (AfA) are not doing enough to promote safer sexual practices.'
Despite acknowledging that the health ministry does not know the "reasons for the sharp increase of HIV in the gay community," Dr Balaji nevertheless quoted the hypothesis of an unnamed "epidemiologist who suggested that this may be linked to the annual predominantly gay party in Sentosa - the Nation Party - which allowed gays from high prevalence societies to fraternise with local gay men, seeding the infection in the local community."

Organised by Fridae, the Nation parties - which are held annually on the eve of National Day - drew about 8,000 people from the region in 2004. An Action for Aids booth at Nation.04 was ordered to be shut down by the authorities as they objected to anti-Aids campaigners handing out condoms and safer sex info as it was perceived to be promoting gay sex.

In response, Roger Winder, programme director of AfA said, "I suppose this is progress compared to quoting a women's magazine as a source of epidemiological data," referring to the minister's mention of an article in a women's lifestyle magazine which detailed the sexual exploits of a gay man who had sex with a hundred men, some of whom were married.

At the same event, he also blamed the "promiscuous and unsafe lifestyle" of some gays for fueling the country's HIV epidemic and accused a lifestyle article published on Fridae.com for promoting promiscuity.

Winder told Fridae: "One would expect comments on a particular source or trend of transmission to be based on careful analysis of epidemiological data. The speech suggests that the comment quoted was based on an individual epidemiologist's opinion or impression rather than on analysed data." He also expressed concerns that the minister's comments published on the front page of The Straits Times on Thursday might cause the (heterosexual) public to be more complacent as they make an even stronger association between HIV/AIDS and gay/bisexual men, also reinforcing prejudices and homophobia. The non-governmental group also fears that the remarks which places the blame on foreigners might mislead MSM in Singapore into thinking that locals are safe. 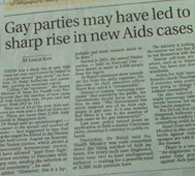 Dr Balaji Sadasivan's comments published on the front page of The Straits Times on Thursday.
Dr Balaji's comments have expectedly drawn criticism from Fridae's chief executive Dr Stuart Koe who highlighted that official health agencies have never addressed MSMs (men having sex with men) in any of their public health campaigns. He added: "Because gay sex is illegal, many of the public health agencies in Singapore aren't even available to work with MSM groups."

Eileena Lee, president of activist group People Like Us, is concerned that the minister's comments might only serve to unfairly link HIV with homosexuality when gays still form the minority of infected people, and further marginalise an already marginalised and stigmatised minority group which receives virtually zero positive visibility.

"It is hoped that such unsubstantiated and unsubstantiable comments be removed from public discourse as it only serves to unfairly target one community without looking at the bigger picture, which is education on safe sex, early and regular testing, and cheap and easy access to anti-retrovirals," she told Fridae.

Commenting on Dr Balaji's latest remarks, a Bangkok-based HIV researcher questioned if fear of stigmatisation had caused artificially low reports in the past and if the country is detecting more cases because more people are coming forward to get tested.

He said, "An increased number of cases, by itself, means little in a population like MSM. We need to look at rates of HIV infection among MSM tested. If the rates are similar to past year's rates then we're diagnosing more infections, but probably not experiencing a dramatic rise in recent infections. We need more information. Those programs that are beginning to provide information should be aided and praised."

Another HIV epidemiologist Fridae spoke to said that it is impossible to say when the infections have occurred as the increased number of HIV infections diagnosed in Singapore are prevalent infections.

Speaking on condition on anonymity, the American scientist added that the reported increase could very likely be the result of an increased awareness regarding HIV infection in the (MSM) community. He sees more people at risk coming forward for HIV testing and being diagnosed as a positive development as these people can be educated and treated if necessary.

He warned that the government's reaction to use data generated from their anonymous test site - which has been organised and operated mainly by MSMs - to stigmatise and discriminate MSM is very "dangerous and counterproductive" and would "dampen the motivation in the MSM community to gather and release these kind of data and will make them feel that their HIV prevention efforts are not appreciated."

"This may lead to a situation where the HIV epidemic in MSM will no longer be addressed and no longer be visible, but will continue to spread unabated, but out of sight. This is the worst thing that could happen, and I urge the government of Singapore to take its responsibility and act responsibly. After all it is the responsibility of the government to protect the health of its citizens, and not to damage it."
Singapore