Hong Kong will be asked what it thinks about homosexuals. Tim Cribb reports the survey will determine Hong Kong's direction on crucial gay issues, from discrimination to same-sex marriage and age of consent.

A crucible for change is being heated in Hong Kong as the government of the Special Administrative Region prepares to put to the test the argument, now being heard again in Singapore, that society is not ready to accept homosexuality or homosexuals. While gay sex acts are still outlawed in Singapore - as with Malaysia and India, Hong Kong which inherited similar laws from its British colonial past had scrapped its laws criminalising gay sex in 1991.

Career civil servant Stephen Fisher, deputy secretary of the Department of Home Affairs, who is spearheading the government move admits, "the very idea of conducting a survey is controversial."

No sooner had the Home Affairs Department indicated the government's intention to revisit the court of public opinion, which indicated in 1995 that Hong Kong was not ready to address the issue of homosexuality, than the battles lines were drawn.

Fisher has since last July been meeting with groups representing, and sympathetic to, Hong Kong's gay, lesbian, bisexual and transgender community. He has heard from Amnesty International, the Human Rights Council, the Equal Opportunities Commission, and local gay and lesbian groups/activists.

The government has convened a Sexual Minorities Forum, which meets every two months to hear the grievances of the gay community. Groups like Amnesty have been lobbying for more government action in education, health services, and addressing the needs to LGBT teens.

Fisher has also been listening to those opposed to homosexuals, the so-called "family values groups" led by the Society for Truth and Light (www.truth-light.org.hk), which have been promoting the line that homosexuals can be cured, and that any recognition of gays and lesbians is a threat to the traditional family.

"There is division, to put it mildly," Fisher says. He dares not put the two sides in the same room, so entrenched are the positions.

To find out what the wider community thinks, some 2,000 people in Hong Kong, selected at random by the government's contract market research agency MVA Hong Kong Ltd, will be asked a set of carefully drafted questions.

Fisher says the survey will attempt to assess community awareness of gays, lesbians and bisexuals, its attitudes towards them and the level of acceptance in different contexts and situations, such as having a homosexual relative, friend, colleague, teacher, employee or tenant.

It will also attempt to measure community attitudes towards the rights of gays, lesbians and bisexuals, such as access to spousal rights, welfare and public housing, as well as the legal age of consent, which is currently 21 for homosexuals and 18 for heterosexuals.

Sensitive to criticism that a 1995 survey was leading and biased, the questions are being carefully vetted by a panel of three prominent Hong Kong figures approached by the government for their reputations of fairness and objectivity.

The three are lawyer Christopher Chan Yiu-chong, former Equal Opportunity chair Fanny Cheung Mui-ching, who is professor of psychology at the Chinese University of Hong Kong, and Priscilla Leug Mei-fun, associate dean of the School of Law at City University.

"These people are well-known and influential in society and have not expressed a view on the issue," Fisher told the Legislative Council earlier this year.

Analysis of the survey results takes about two months, with the findings to be released in the latter part of this year. On the basis of those findings, the government will decide whether Hong Kong is ready for change. Fisher has stepped away from an earlier suggestion that only a result of more than 50 per cent support would take the process to public consultation and a Sexual Orientation Discrimination Ordinance. 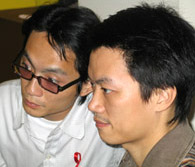 A High Court ruling is expected by the end of the year on recognition of the Canadian marriage of Roddy Shaw Kwok-wah and Nelson Ng Shin-pan.
"If most (respondents) have an open mind, or no view, then they (the public) may be ready for this," he says. "If there is no major opposition, then we can move forward."

Gay activists say the government is moving much too slowly, with another year gone before the question of legislation and the drawn out public consultation process, is even considered.

Legislator Emily Lau Wai-hing told Fisher during a recent Home Affairs Panel meeting of the Legislative Council: "We don't object to the survey, but we want the legislation… I think you are just dragging your feet."

He responded: "There must be public support… and LegCo support. We do not have that yet."

Fisher says the issue is not just about enacting a law to protect a group from discrimination - it is also about what people believe homosexuality to be.

Recourse to a survey has already drawn sharp criticism. Legislator Fernando Cheung Chiu-hung said "the government's approach is dangerous… whether we protect basic human rights should not be based on public opinion."

And the Hong Kong branch of human rights watchdog Amnesty International said: "The need to legislate to protect freedom from discrimination should not be determined by public opinion surveys.

"Every individual is entitled to freedom from discrimination as enshrined in the Universal Declaration of Human Rights. We strongly urge the government to legislate to fulfil its responsibilities to protect the rights of all citizens, regardless of their sexual orientation and irrespective of public opinion," Amnesty said.

The level of discrimination against homosexuals is hard to measure, but activist group Civil Rights for Sexual Diversities has been gathering data, as has support group Horizons, and it suggests there were upwards of 50 instances of discrimination on the grounds of sexual orientation in Hong Kong last year.

The courts have no grounds to hear such cases, but may decide Hong Kong's future direction for it on a number of other issues.

A High Court ruling is expected by the end of the year on recognition of the Canadian marriage of Roddy Shaw Kwok-wah and Nelson Ng Shin-pan, and a challenge is underway to age-of-consent laws involving charges brought against two men, one of them aged 19. In December last year, the courts heard a case for statutory rape and public indecency when the teen was found having sex in a parked car with another 30-year-old male. The age of consent for gay males is 21 (16 for heterosexuals and lesbians) and the law also prohibits public sex between two men while no provisions exist that criminalises sex in public for heterosexuals and lesbians.

Both cases could ultimately force a major rewriting of Hong Kong legislation.

On a wider front, the Immigration Department is being confronted with an increasing number of married expatriate same-sex couples seeking dependant spouse visas.

The department does not comment on specific cases, nor does it go beyond stating each application will be considered on its merits. It is understood a special six-month visa is now being issued, twice the tourist visa, but half the normal working visa.

As in Singapore, there has been much noise about so-called "family values."

Religious conservatives insist the Bible makes clear that homosexuality as a sin, though it seems to carry more currency than adultery.

Progressives maintain that the dogma against homosexuals set down 1,500 years has no place in society today - nor does slavery and the subjugation of women, both of which are condoned by the Scriptures. Reverend Ralph Lee, head of the Methodist Church in Hong Kong, says he fears a growing division, with no possibility of compromise.

Lee believes the survey will likely show Hong Kong has yet to make up its mind about homosexuality. "There could be more tolerance, but I don't think we will see acceptance," he says. By making it a black-and-white issue, there is the risk of driving the undecided and still silent majority towards the conservative camp.

Anglicans in Hong Kong, who watched their church move to the brink of schism over the ordination of a gay bishop in the US, alienating the diocese in Africa and Southeast Asia, have so far stood aside from the debate, opting instead for discussion within individual congregations, says Chancellor Andrew Chan.

The Roman Catholic Church in Hong Kong appears to be straddling the issue, one the one hand the church's Justice and Peace Commission saying the issue is one of human rights, and on the other the Marriage Advisory Council, which fears an assault on the traditional family and an undermining of the sanctity of marriage.

Reverend Fai Luk, of the Church of Christ in China, while doctrinally opposed to homosexuality, says there is a spirit of tolerance, though he concedes it is up to each of its 62 churches to decide.

Still, none of the mainstream churches, representing most of Hong Kong's about one million Christians, oppose the idea of a Sexual Orientation Discrimination Ordinance, ("so long as it is not written too widely," says Rev Luk).

A vocal minority - predominantly fundamentalist evangelicals - says otherwise and have mounted an active letter-writing campaign to swing the survey, and have been lobbying the survey group in an attempt to skew the questions.

A more low-key approach is being taken by the gay and lesbian Blessed Minority Christian Fellowship (www.bmcf.org.hk), which has its own ordained minister and a congregation of 70. It published in early March a book (in Chinese) of testimonials from members, their families and sympathetic religious figures.

"There is an ethical, moral dimension to this," says Fisher. "Some people do not believe they are discriminating. Not only do they see nothing wrong with what they believe, they feel very strongly they are doing the right thing.

Fisher says the objective of the survey has become a question of "whether the community as a whole should move forward."

"That's for the survey to determine and public consultation to consider," he says.

In preparation for what will likely be an extremely heated debate in the months ahead, Home Affairs has secured funding from April 1 for a two-person Gender Identity and Sexual Orientation Unit, which will monitor complaints of discrimination and explore specific areas of concern among the interested parties.
Hong Kong