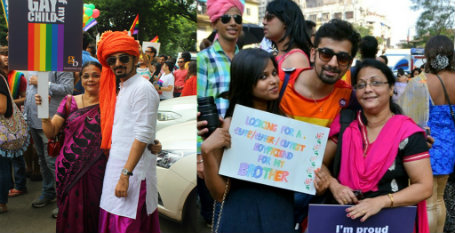 The focus for Mumbai Pride 2018 was India's colonial anti-gay law.

Thousands of LGBT took to the streets of Mumbai this weekend for a pride parade themed 'Section 377 Quit India,' referencing the country's colonial-era law that criminalises sex "against the order of nature".

India's only gay prince Manvendra Singh Gohil said: "Homosexuality has existed in our country since the bygone era and we also find evidence of the same in our mythology, culture, literature, art and tradition. It's important for the society to realise that no amount of stigmatisation and discrimination will deter the queer community from fighting for and securing their rights," according to