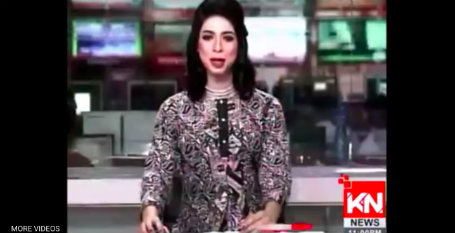 Marvia Malik becomes first transgender news anchor after being disowned by her family.

Pakistani journalist Marvia Malik, 21, has become Pakistan's first transgender newsreader when she made her debut appearance on the Kohenoor TV news channel this week.

Her television appearance came just days after she was the first transgender model at a Pakistan Fashion Design Council catwalk show.
Malik, like many transgender people in South Asia, faced discrimination and was disowned by her family.

"I got a lot of appreciation from those associated with the fashion industry when I did catwalk modelling two weeks back, and now this... it's quite overwhelming," she told the Thomson Reuters Foundation.

"I was thrown out after [10th grade] after which I joined a beauty salon, earned just about enough to put myself through college, but it was not easy. My story is no different from that of a hijra on the street you see begging."

In an interview with the BBC, Malik added: "My family knows I have modelled and they know that I work as a newscaster. It's the age of social media and there's nothing that my family doesn't know. But they have still disowned me."

Watch her appearance below: