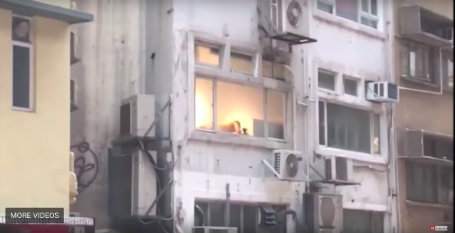 One voyeur of the couple said it was better viewing than the World Cup.

Footage of crowds gathered in Hong Kong to watch a couple having sex through a window went viral this week.While one man was visible throughout, the second man only revealed himself as a man minutes into the act, eliciting whoops and shouts from the crowd.*The Oriental Daily reports*http://hk.on.cc/hk/bkn/cnt/news/20180619/bkn-20180619112622914-0619_00822_001.htmlsome spectators joked that the scene was more exciting than the World Cup.Police are allegedly investigating whether the pair infringed public decency and could be liable for a HK$1,000 fine ($127) and six months in jail.