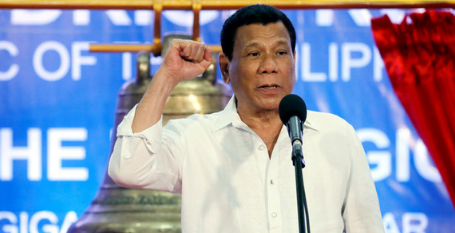 Philippine president's office defends claim he 'cured' himself of being gay

A spokesperson said Duterte was 'always conscious of not offending the sensibilities of these special classes’ and 'a kind person’.

The Philippine President’s office has defended Rodrigo Duterte’s recent remarks that he used to be gay but ‘cured’ himself. At a meeting with the Filipino community in Japan on Friday (31 May), Duterte said he ‘became a man again’ when he met his now ex-wife. The 74-year-old president later used the word ‘bakla’, a homophobic slur. Bahaghari, a gay and transgender advocacy group, labelled the comments dangerous and retrograde. But on Tuesday (4 June), presidential spokesperson Salvador Panelo said the LGBT Community should be ‘glad’ about Duterte’s remarks. ‘The remarks meant that he had ‘changed’ his sexual preferences,’ Panelo is reported to have said. ‘What’s wrong [with that]?’ He also reportedly asked. ‘Let me say that the President is always conscious of not offending the sensibilities of these special classes. He is a kind person,’ Panelo also said.