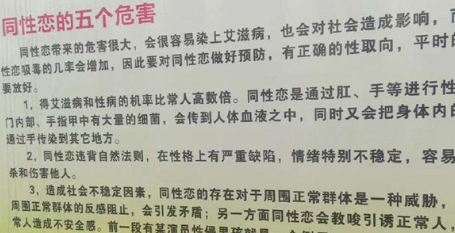 The school in China's poster claimed homosexuality poses a threat to 'normal’ society.

Public outcry prompted a school in South China to remove a classroom display explaining the ‘harms of homosexuality this week’. Hengxian No.2 High School in the Guangxi removed the poster, which was intended to prevent HIV, this week, according to an employee.

Photos widely shared on the internet show the poster’s ‘harms of sexuality’ column, which claimed how homosexuality allegedly goes against the laws of nature and that homosexuals are mentally unstable, with a higher risk of suicide or of harming others. It also lists LGBT people as a threat to ’normal’ society. What’s more, it said homosexuals have a shorter life span. Finally, they are more vulnerable to addiction due to a ’spiritual void’, the classroom poster stated.

‘I cannot imagine how LGBT students at this school feel after seeing this’ one user wrote on Weibo. ‘I hope my LGBT friends will never see or hear words like these’ they also said. A school in Hunan province, meanwhile, this week launched an ‘LGBT anti-discrimination wall’.