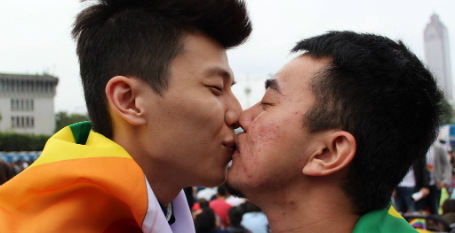 Taiwan is often described as Asia’s most gay-friendly place, not least after becoming the first in Asia to legalise same-sex marriage.

It also boasts the region’s biggest Pride Event and has a vibrant “pink” economy.

t’s clear, however, that nearly eight months after same-sex marriage became legal, many in Taiwan remain deeply opposed to the law that grants “two persons of the same gender” the right to create a “permanent union.” Ahead of the Jan. 11th presidential and legislative elections, opponents of president Tsai Ing-wen were campaigning against her support for LGBT rights. Tsai publicly backed the law, tweeting #LoveWins the day it passed.

Her opponents disseminated homophobic false information to discredit Tsai’s record in office. One example was a post that circulated on Taiwan’s dominant chat app Line, and on Facebook, asserting that Tsai’s Democratic Progressive Party (DPP) had spent NT$30 million (approx. US$980,000) organising this year’s Pride parade in Taipei, and it featured photos of scantily clad men. “Do you want your kids to be like this? Is this how you will cast your vote?” the post asked.

A similar wave of anti-LGBT fake news flooded Taiwan in November 2018, ahead of the then public vote on same-sex marriage. Posts that went viral at the time included ones that linked marriage equality to HIV, and suggestions that legalising gay marriage would turn Taiwan into a ‘depraved society’.