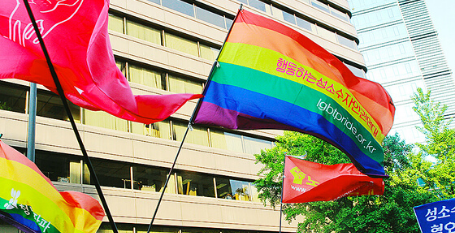 In Seoul, many enjoy the annual Queer Culture Festival, regardless of their sexual orientation, with nearly 150,000 enjoying last year’s 20th anniversary festival. During the festival, participants urged the government to improve LGBT rights.

Sadly, during the festival, some Christian groups staged anti-LGBT demonstrations, with banners declaring that homosexuality is a sin, that same-sex unions would spread AIDS across the country, and that gay unions would create chaos in Korean society. However, such Christian groups are not alone in their hateful stance towards South Korea’s LGBT Community.

For example, a recent controversy over a transgender soldier suggests that many Koreans remain hostile to gender minorities.  A transgender tank driver was discharged from the Republic of Korea Army after undergoing sex-reassignment surgery and subsequent web posts came in support of the army’s decision, stating the tank driver to be ‘selfish and stupid’ to have made a plea to the army.

Also, last November, lawmakers in the Liberty Korea Party proposed an amendment that would remove sexual minorities from those who are protected from discrimination under the country’s National Human Rights Act.

In contrast, and as a first in Asia, Taiwan last year legalised gay marriage - putting South Korea’s seeming regression on LGBT rights and tone of debate in sharp contrast.