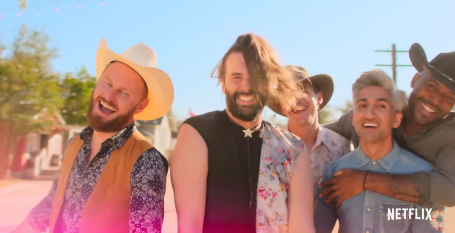 Are streaming services the solution to providing more LGBTQ representation to Asian audiences?

There's more queer characters on our screens but censorship remains a barrier.

US-based NGO GLAAD has revealed a wealth of LGBT+ representation on streaming platforms in their annual report ‘Where We Are on TV’.
The report showed that there were 245 LGBTQ series regulars and 113 LGBTQ recurring characters across Netflix, Hulu, Apple TV+, Paramount+, HBO Max, Amazon, Disney+, and Peacock.
GLAAD began reviewing Netflix and Hulu six years ago but this marks the first time that newer streaming services like Apple TV+ have been included in the yearly review.
ADVERTISING
However, despite competition from the scrappy newbie streamers, Netflix still topped the charts with 155 queer characters, the runner-up was HBO Max with 77.
“It is exciting to see quick progress made year-over-year with a new record high percentage of LGBTQ series regulars…as well as increases in underrepresented parts of the community including queer women, transgender characters, and LGBTQ people of color,” says Megan Townsend, GLAAD’s Director of Entertainment Research & Analysis.
As Chile legalises same-sex marriage, where in Europe is making the most progress on LGBT rights?
MTV EMA's show support for LGBTQ community in Hungary
“However, we continue to see that LGBTQ inclusion is often found in clusters from a concentrated number of creatives and networks who have prioritised telling our stories,” she continues.
Talking about their increased reporting on streaming services, GLAAD highlighted the change in consumer habits during the pandemic, and the potential that an increase on streaming’s market share has to change the media landscape.
However, not everyone is convinced that progressive changes by the likes of Netflix and Disney+ are purely altruistic.
“Whether or not they [streaming platforms] allow for more diverse stories is ultimately down to their bottom line and whether they believe diverse stories will bring in revenue,” says Josh Rivers, head of communications for UK Black Pride and creator and host of the podcast ‘Busy Being Black’.
“I would love to see streaming platforms – and media in general – take more risks when it comes to who is allowed to tell stories and what types of stories are told,” he continues.
Streamers vs the world
Reed Saxon/AP
the 'Friends' reunion was censored by the Chinese government to remove references to LGBT plot linesReed Saxon/AP
An increase in LGBTQ storylines and characters may appear to be on the up, but the international nature of streaming means that progressive agendas in the boardroom can sometimes hit legislative roadblocks.
Recently the Chinese government received complaints from fans and international commentators when they censored same-sex plotlines and references on the ‘Friends’ reunion.
It is not the first time Chinese censorship of LGBTQ issues has come under scrutiny; in 2018 Mango TV was told it could no longer air the Eurovision Song Contest after it censored Irish and Albanian entries, as well as blurring out a rainbow flag in the Lisbon crowd.
“China is a funny case,” says Marshall Moore, senior lecturer in English and Creative writing at Falmouth University, who left Hong Kong in 2020 due to increased Chinese control.
“It was heading in a progressive direction and there has been an about-face since Xi Jinping has been in power.
“They’re heading towards a cultural revolution style of governance.”
Elsewhere in Southeast Asia, a Malaysian MP petitioned the government to censor all LGBT content on Netflix, a request which was denied.
'It makes no sense': David Fincher slams China's censorship of 'Fight Club' ending
Autocrats vs the arts: Which European nations are cracking down on their cultural sectors?
Meanwhile in Turkey, Netflix cancelled their Turkish original ‘If Only’ in 2020 after pressure from the Turkish government to remove a gay character from the show. The Turkish government is already able to take action including fines for shows which have LGBT content.
All this begs the question; whilst streamers are writing an increasing number of LGBT storylines, will they stand up for their characters against censoring regimes?
“I think the way that some of the bigger media corporations and tech companies have actually played along sets the precedent,” says Moore.
“Media companies who are playing along with places like this are doing it for financial reasons. Do I think they will stand up to regimes? I don’t know that I have seen any examples of that,” he continues.
NB, Bi and characters of colour on the up
AP Photo
Netflix teen drama 'Never Have I Ever' features many LGBTQ charactersAP Photo
Highlighted in the report is an increase in non-binary representation with special mentions for Netflix teen drama ‘Sex Education’ and the introduction of LGBT+ plotlines to other Netflix shows ‘Never Have I Ever’ and ‘Dear White People’.
HBO Max was recognised for its featuring LGBTQ characters in comedy shows including ‘Hacks,’ ‘Sort Of,’ and ‘Sex Lives of College Girls’.
Meanwhile, on Disney+ more queer characters entered the Marvel extended universe with Loki’s bisexuality confirmed and a recurring LGBT+ character in ‘Hawkeye’.
Joelle Taylor wins TS Eliot prize for poetry in 'triumphant' moment for visibility
Star of 'Juno' and 'Umbrella Academy' Elliot Page announces memoir for 2023
The report noted that 29 per cent of LGBTQ characters across streaming, broadcast and cable in the US are bisexual, with more marginal sexualities represented by two asexual characters on streaming platforms.
The racial diversity of LGBTQ+ characters on streaming services was found to be at 52 per cent people of colour which breaks down into 17 per cent black, 13 per cent latino and one-tenth asian-pacific islanders.
Diversity within LGBTQ casting, i.e. having characters who are not all white gay men, can be a hot topic within queer circles, as is the subject of representation itself.
“The diversity we have on streaming platforms is not enough. Not only in numbers, but in scope. White gay men and women are still "the standard" when it comes to representation,” says Rivers.
“Representation in film and television, on its own, isn't an effective counter to the real-life experiences of discrimination, erasure and violence that Black LGBTQ people face daily.”

The annual report from US-based equality organisation GLAAD - Where We Are On TV - has revealed an increase in LGBTQ representation, with most of the queer characters appearing in content created by streaming platforms such as Netflix.

Of the streaming services, Netflix is still the frontrunner for queer representation, with 155 LGBTQ characters. The next highest was HBO Max which had 77.

“It is exciting to see quick progress made year-over-year with a new record high percentage of LGBTQ series regulars, as well as increases in underrepresented parts of the community including queer women, transgender characters, and LGBTQ people of color...” said Megan Townsend, GLAAD’s Director of Entertainment Research & Analysis.

“However, we continue to see that LGBTQ inclusion is often found in clusters from a concentrated number of creatives and networks who have prioritised telling our stories...” adds Townsend.

One of the big impacts of the emergence of streaming services is the internationalisation of content. Queer characters and queer storylines created on streamling platforms can now readily be seen all around the world.

However, localised censorship restrictions continues to be a barrier to LGBTQ people seeing themselves represented on screen. For example, LGBTQ storylines were recently removed by censors in China - restricting what audiences saw.

We also recently saw a Malaysian MP petition the government to censor all LGBTQ content on Netflix - in that instance, the request was denied, but it does highlight the tension between the democratisation of streaming services and those governments seeking to restrict what content audiences have access to.