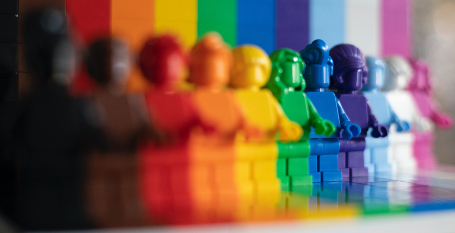 Rainbow-coloured toys and clothing have been seized by Saudi authorities in latest crackdown.

Hair clips, bows, pop-its, hats, pencil cases and more have been taken away from shops in the capital Riyadh for “contradicting the Islamic faith and public morals”, one official said.
ADVERTISING
A report broadcast Tuesday evening (14 June) by the state-run Al Ekhbariya news channel claimed the government are confiscating the products as part of a “crackdown” on LGBTQ+ rights.
“We are giving a tour of the items that contradict the Islamic faith and public morals and promote homosexual colours targeting the younger generation,” said a commerce ministry worker involved in the campaign.
“The homosexuality flag is present in one of the Riyadh markets,” a journalist added. One shopkeeper protested the sweep, saying the apparently offending items are simply rainbow coloured. Nothing more.
The kingdom’s Ministry of Commerce and Investment shared the broadcast on Twitter, noting that rainbow products “contradict common sense” and “legal penalties” will be dealt to anyone selling them.
More from PinkNews
Stars you didn’t know are LGBT+
Celebs you didn’t know have an LGBT sibling
The stars who went gay for pay
In Saudi Arabia, same-sex activity of any kind is strictly prohibited under Shariah Law. LGBTQ+ folk face death sentences, torture, chemical castration and more from a society that sees being LGBTQ+ as immoral.
Five men were executed after admitting they had had sex with other men in 2019. The following year, a Yemini blogger was imprisoned and deported in 2020 for a social media post saying he supports gay people.
The General Commission for Audiovisual Media, a government media regulator, has increasingly taken aim at movies that dare to depict same-sex affection for even a few seconds.
Lightyear star Chris Evans and Doctor Strange actor Benedict Cumberbatch both expressed frustration at their respective films being targeted by the Gulf nation’s censors.
Disney refused to chop out a 12-second scene in Doctor Strange in the Multiverse of Madness of a character saying they have two mothers. But Saudi Arabia has become among more than a dozen countries to outright ban Lightyear over a same-sex kiss.

Hair clips, hats, pencil cases and more have been seized by Saudi authorities and removed from shops in the country's capital Riyadh. The reason given?  For “contradicting the Islamic faith and public morals.”

Government-controlled media outlets in Saudi Arabia are reporting that the authroties are seizing rainbow-coloured items as part of a wider crackdown on LGBTQ people.

The government's justification is that products that promote "homosexual colours" are used to target the younger generation. It's the "grooming" trope that obviously has no basis in reality.

What's life like for LGBTQ people in Saudi Arabia?

What’s life like for LGBTQ people in Saudi Arabia? Let’s take a look at some of the key equality indicators.

Is homosexuality legal in Saudi Arabia?

Homosexuality is illegal and state-sanctioned persecution is commonplace.

The country doesn’t have a codified criminal code but homosexuality is listed among the crimes that warrant arrest and imprisonment.

Homosexuality can be punished by death.

Are there anti-discrimination protections in place for LGBTQ people in Saudi Arabia?

No, there are no protections from discrimination on the grounds of sexuality.

Is there Marriage Equality in Saudi Arabia?

No. There is no legal recognition of same-sex relationships.

What’s life like for LGBTQ people in Saudi Arabia?

Saudi Arabia is considered one of the most anti-LGBTQ countries in the world. It is an ultra-conservative society, heavily influenced by religion.

This is a dangerous place for LGBTQ people.