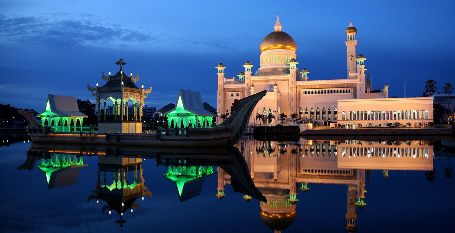 Brunei named as the most dangerous country for LGBTQ travel

The annual LGBTQ+ Safety Travel Index puts Canada at the top of the list as the safest country for queer people to travel to.

Brunei has edged past Nigeria to emerge as the most dangerous country in the world for LGBTQI travellers, according to the annual LGBTQ+ Safety Travel Index. And for the second year in a row, Canada has topped the list as the safest country for LGBTQI travellers.
The index was created in 2019 by travel bloggers Asher and Lyric Fergusson. This year, the couple researched 203 countries, up 53 countries from the first edition.
“Our original 2019 study only had 150 countries. Adding in 53 more brought a few surprises that I wasn’t aware of previously,” Asher told Star Observer.
Best And Worst Countries For LGBTQI Travellers
Sydney Gay And lesbian Mardi Gras 2022.
Keeping Brunei company in the list of 10 worst countries for LGBTQI travellers were Nigeria, Kuwait, Saudi Arabia, Guyana, Malaysia, Malawi, Tonga, Somalia and Libya. All these countries had laws that criminalised homosexuality with the punishment for being gay being long prison terms or even death. Afghanistan was the 11 dangerous country for LGBTQI travellers.
The 10 safest countries for LGBTQI travellers were Canada, Sweden, Netherlands, Malta, Portugal, United Kingdom, Belgium, Norway, Spain and France. US came in at number 24, due to the fact that some states don’t have protections for LGBTQI people from discrimination and new anti-LGBTQI laws were passed in some states, like the ‘Don’t Say Gay Bill’ in Florida.
According to Asher, the index took into account factors such as criminalisation of same-sex relationships, propoganda/morality laws, laws regarding transgender legal identity, trans murder rates, legalisation of same-sex marriages, protections for LGBTQI workers, anti-discrimination laws, criminalisation of hate-based violence, adoption by same-sex parents and Gallup’s latest poll: “Is it a good place to live for gay or lesbian people?”.
Trans Murder Rates
Sydney Gay And Lesbian Mardi Gras 2022.
“Nigeria was always the lowest-performing country but now in the 2022 update, we have Brunei, which has taken the lowest spot,” said Asher. This follows a new law enacted in Brunei in 2019, which punishes male homosexual acts with death by stoning.
This year the index considered an additional factor, trans murder rates. This resulted in some countries falling in the rankings – Brazil fell from 14th position to 33. “Although Brazil has mostly favourable laws for the LGBTQI community, the violence towards trans individuals is one of the worst in the world,” said Asher.
Across the world while things are getting better for LGBTQI people, some countries are sliding down the scale. “In the majority of countries, we see that they are becoming more LGBTQ-friendly over time. However, certain countries such as Hungary have gone backward,” said Asher.
Australia Improves Its Ranking
Australia, which came in at 17th in the 2019 index, improved its position to 15th in the 2022 list. One of the factors that is holding back Australia is the fact that criminalisation of hate-based crimes and transgender protection laws varies by state.
“One subtle sign that things are improving (in Australia) is with the Gallup poll ratings going from 81% of people saying the area where they live is good for gay or lesbian people to now 83% in the latest 2021 survey. One area where Australia could improve is removing the laws in certain states like NSW that require transgender people to undergo sex affirmation procedures (to change the gender marker in their documents),” said Asher.
Ukraine was at 83rd safest country for LGBTQI travellers, whereas Russia was placed at 132rd position. The index noted that data was collected prior to the Russian invasion of Ukraine. “Keep in mind that (as in all instances of political unrest), the most marginalized people in society are often targets. Please note that the situation for LGBTQ+ people is constantly evolving in the region,” the bloggers noted.

Brunei has edged past Nigeria to emerge as the most dangerous country in the world for LGBTQI travellers, according to the annual LGBTQ+ Safety Travel Index.

The safest place for queer people to travel to? It's Canada, topping the list for the second year in a row.

Created in 2019 by travel bloggers Asher and Lyric Fergusson, for this year's index, the couple researched 203 countries.

Other countries that you're probably going to want to avoid - according to the index - include Nigeria, Kuwait, Saudi Arabia, Guyana, Malaysia, Malawi, Tonga, Somalia, and Libya. All these countries have laws that criminalise homosexuality with the punishment for being gay being long prison terms or death.

The 10 safest countries for LGBTQ travellers - according to the index - are Canada, Sweden, Netherlands, Malta, Portugal, United Kingdom, Belgium, Norway, Spain, and France.

What’s life like for LGBTQ people in Brunei? Let’s take a look at some of the key indicators.

Is homosexuality legal in Brunei?

No.Brunei came under the control of Britain in 1888, and did not secure independence until 1984. Brunei’s constitution was written in 1953, and drew much of its legal system from Britain’s common law framework.

In 2013, the Sultan of Brunei announced his plan to introduce Sharia law into the country’s penal code. Under the plan, Sharia law would apply to the Muslim citizens of Brunei – approximately two-thirds of the population.

Despite international criticism, and concern expressed by the United Nations, Brunei has been pushing ahead with the implementation of Sharia law. The new penal code – which included the death penalty for same-sex sexual activity – came into effect in 2019.

Gay sex was illegal in Brunei even before the introduction of Sharia law. The penalty was imprisonment for up to ten years.

Are there anti-discrimination protections for LGBTQ people in Brunei?

No. There are no protections against discrimination on the grounds of sexuality.

Is there Marriage Equality in Brunei?

No. There is no legal recognition of same-sex relationships.

Brunei is a socially conservative country.Homosexuality is a taboo subject.

The contradiction of Prince Azim

In recent years, the ruling family of Brunei has mourned the loss of Prince Azim – the 38-year-old was fourth in line to the throne.

Despite the systemic homophobia of Brunei, Prince Azim – who was reportedly the Sultan’s favourite son – did not attempt to conceal that he was a gay man.

Prince Azim travelled widely and was renowned for his extravagant lifestyle and lavish parties.