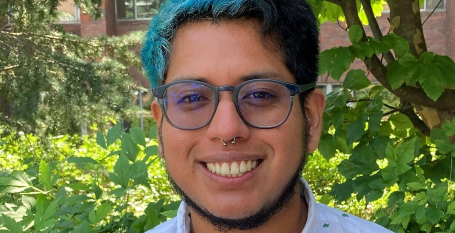 Trans activist and Harvard student Rodrigo Ventocilla died in “extremely disturbing circumstances” after being arrested in Indonesia.
Ventocilla was on his honeymoon when he died in a hospital in Denpasar, Bali, on 11 August. He was 32.
Student newspaper The Harvard Crimson reported his death on Wednesday (24 August). It said he had been detained for for alleged drug possession upon his arrival in Bali, five days before his death.
According to the paper, Ventocilla’s family alleged he was arrested in “an act of racial discrimination and transphobia”, deprived of basic rights and subjected to police violence.
During this time, the man’s family and lawyers were “kept in the dark about his condition”, The Harvard Crimson reports.
Ventocilla was pursing a master’s degree in public administration in international development at Harvard Kennedy School, where he was a member of the school’s class of 2023.
He was also a founding member of the Peruvian trans rights advocacy organisation, Diversidades Trans Masculinas.
A statement released on Tuesday (23 August) saw the families of Ventocilla and his spouse, Sebastían Marallano, call on the Peruvian justice system “to properly investigate the human rights violations of Rodrigo and Sebastian and to guarantee truth, justice and reparation”, the newspaper reports.
The following day, Harvard Kennedy School dean Douglas W Elmendorf said the university “supports the family’s call for an immediate and thorough investigation and for public release of all relevant information”.
Elmendorf said he had received a statement from Ventocilla’s family “with their description of extremely disturbing circumstances surrounding Rodrigo’s death”.
He added: “The statement from Rodrigo’s family raises very serious questions that deserve clear and accurate answers.
“Harvard Kennedy School supports the family’s call for an immediate and thorough investigation and for public release of all relevant information, and the school stands with all of Rodrigo’s friends and colleagues and with the LGBTQ+ community.”
Bali Police blame death on drugs
According to the Bali Police and a Facebook post from Diversidades Trans Masculinas, Ventocilla was detained on 6 August upon arrival at I Gusti Ngurah Rai International Airport, Denpasar, for possession of a herb grinder.
Bali Police claimed officers found other items suspected to contain marijuana and two pills in Ventocilla’s luggage, newspaper Radar Bali reported.
Ventocilla’s family said he was arrested for possession of prescription drugs used as mental health medication.
They said Ventocilla and his partner were deprived of “vital human rights such as health, freedom, access to legal defence” in a statement reported by The Harvard Crimson.
Ventocilla’s partner arrived in Bali on a separate flight and was detained by police without charge after attempting to help his spouse, the family claim, and was hospitalised days after being detained by police, who reportedly demanded upwards of $200,000 to free the couple.
Indonesian news outlet Radar Bali reported that Ventocilla was brought by authorities to Bhayangkara Hospital after experiencing stomach pain and vomiting, and after his condition deteriorated he was transported to Sanglah Central General Hospital.
A Bali Police official told local media that Ventocilla died after consuming unsealed drugs on 8 August, while he was in police custody.
“The cause of death is a complete failure of body function that causes impaired kidney function and impaired liver and nervous system function to the patient’s brain,” Setianto said, according to a translation of his statement to detikBali reported by the Crimson.
More from PinkNews
Stars you didn’t know are LGBT+
Celebs you didn’t know have an LGBT sibling
The stars who went gay for pay
But Ventocilla’s family cast doubt on this version of events, and have called for an autopsy.
“The Indonesian police obstructed access to the hospital at all times, to the lawyers hired by the family, as well as the Harvard students who came to their aid,” the family said.
Ventocilla’s family called on the Peruvian Foreign Ministry to “assume its responsibility for neglecting its duties” and to conduct an investigation into “the actions and omissions” of Julio Eduardo Tenorio Pereyra, the head of consular services for the embassy.
“Nothing will give us back Rodrigo nor the integrity of Sebastian, however, our demand for justice and truth also pursues the objective of improving the quality of the service of assistance to our fellow citizens abroad without preferences of class, gender, ethnicity or others,” the family said.
Diversidades Trans Masculinas posted on Facebook to say: “As an organisation, we are deeply sorry for the passing of Rodrigo, who in life was a companion, friend and husband… we will be vigilant to make sure justice is served.”
Bali Police has reportedly launched an investigation into Ventocilla’s death. It was approached for comment.

Rodrigo Ventocilla died after being arrested in Indonesia.

Ventocilla was on his honeymoon when he died in a hospital in Denpasar, Bali, on 11 August. He was 32.

Local media reporting indicates that Ventocilla had been detained for for alleged drug possession upon his arrival in Bali, five days before his death.

Ventocilla was a student at Harvard Kennedy School. He was also a founding member of the Peruvian trans rights advocacy organisation, Diversidades Trans Masculinas.

A statement released by Ventocilla's family calls on the Peruvian justice system to investigate the circumstances surrounding Ventocilla's death.

Reporting indicates that Ventocilla was detained upon arrival at Bali's international airport when a herb grinder was detected in his luggage.

Ventocilla’s husband - Sebastían Marallano - arrived in Bali on a separate flight and was detained by police without charge after attempting to help his spouse.

It appears that the police took Ventocilla to hospital after he began experiencing stomach pain. Ventocilla's condition deteriorated, and he subsequently died.

Ventocilla's family do not accept the version of events being presented by the authorities in Bali and have called for an autopsy.

What’s life like for LGBTQ people in Indonesia? Let’s take a look at some of the key equality indicators.

Is homosexuality legal in Indonesia?

Pretty much. In most of Indonesia, homosexuality is not criminalised. But there are some parts of the country that operate under Sharia law, which criminalises same-sex sexual activity.

Are there anti-discrimination protections in place for LGBTQ people in Indonesia?

No. There are no protections from discrimination on the grounds of sexuality.

Is there Marriage Equality in Indonesia?

No. There is no legal recognition for same-sex relationships.

Indonesia is a socially conservative country. Homosexuality is seen as a taboo subject.

Homophobia is systemic. It appears that censorship restrictions and public decency laws are being used to target and persecute LGBTQ people.