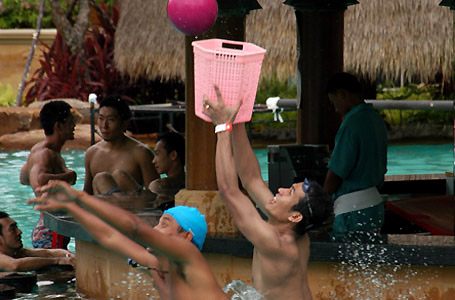 With DJs Rock G (Hong Kong), Kosuke (Japan), David Sung (Taiwan) at the decks, the Sanctuary Pool Party - which is being co-hosted by HX Production - proved to be a great success with many dancing in the rain right to the end!

After a day of parties, everyone is now totally charged! Water polo proves to be the most popular, involving some 20 men and women. They are all pitching and catching, trying to get the ball into the opponents' hole. And it's obvious for all to see, some are more successful than others! 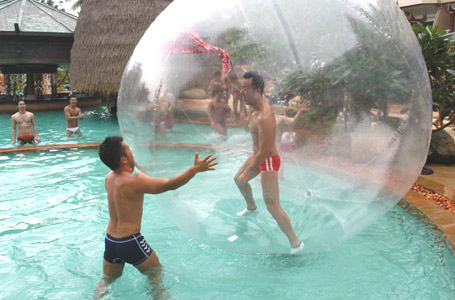 A man in a ball? You might be wondering what the hell is going on but this performer - a good friend of Rocky from HX Production - is doing it before your very eyes. He first hops into an air-filled balloon, tours around the stage and finally splashes into the paddling pool. Due to the sheer size of the latex-construction, he requires a lot of help to move forward. 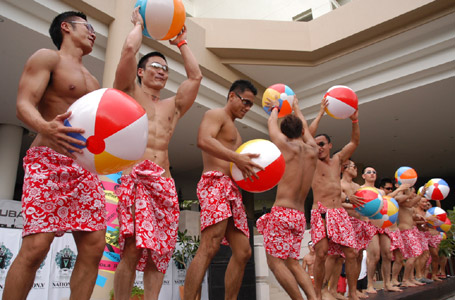 A group of hunks do their thing on the podium, and throw plastic balls and buoys into the crowd. The reaction? The balls get thrown back and the whole house gets into a ball-throwing frenzy. Even people who were previously too shy joined this party madness. 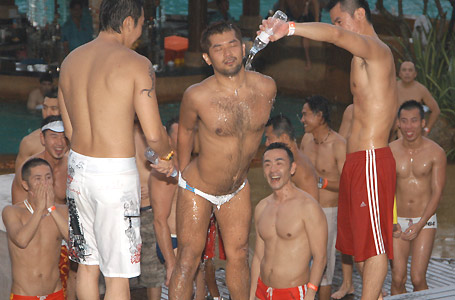 It's raining men! A torrential downpour toward the end of the party was a much welcomed relief for all from the afternoon sun. Tsuyoshi (middle), an officer working for the Japanese government, lathered himself with soap before being car-washed by hot men who queued up to help. He won so much applause that the guys dancing in front of him give him a big kowtow.