Should a recently circulated church statement, which called homosexuality "sinful, abhorrent and deviant" and for the criminalisation of lesbian sex, cause LGBTs to lose sleep? Fridae columnist and gay activist Alex Au weighs in on the issue.

(This column is in response to a statement issued by National Council of Churches of Singapore which commended the government on its stance on anti-gay legislation and called for the criminalisation of lesbian sex. Click here to read. )

A week ago, the Methodist Church in Singapore circulated a statement calling homosexuality "sinful, abhorrent and deviant." More specifically, the statement, which had been issued earlier by the National Council of Churches in Singapore (NCCS), expressed support for, inter alia, the government's proposal to retain Section 377A of the Penal Code, which makes "gross indecency" between two men a criminal offence. 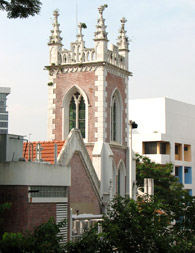 The Penal Code had never had any law specific to lesbian sex.

The NCCS statement had nothing significant to say about the legalisation of sodomy for heterosexuals even though for a long time this too was included within the scope of "unnatural sex" they had railed against. Instead, the statement narrowed the focus to gay people, and then, in a call for consistency, urged the government to criminalise "lesbianism" to the same degree as male homosexuality.

The gutlessness in not taking on the government and the heterosexual majority over the legalisation of sodomy for the latter is striking. Perhaps the NCCS knew that despite putting up the proposed changes for public feedback, the government had essentially made up its mind. No use trying to move the immoveable?

In that case, is the call to criminalise lesbian sex just so much posturing? Should we just laugh it off?

Secular government
Indeed, in many ways, the Singapore government is very watchful of its secular credentials. It pro-actively ensures that faith groups do not venture into politics, achieving this by various legal and institutional means (e.g. religious groups have to be registered under the law), together with the occasional behind-the-scenes warning to vocal clerics.

Heretofore, they have justified this state of affairs - and the censorship that supports it - by the claim that "the majority is conservative." Over the years, they have not produced much evidence for this, except for a finding from the 2001 Social Attitudes Survey. In that study conducted by the government, 85 percent of Singaporeans said homosexuality was "unacceptable." Of those aged 15 - 29, a somewhat lower percentage (71 percent) too found it "unacceptable."

However, more recent data have begun to challenge those results. For example, the Singapore Polytechnic last year surveyed 800 Singaporeans aged 15 - 29 with exactly the same question as the government's 2001 survey, and found that only 42 percent considered homosexuality "unacceptable." Clearly, there has been a marked change in the same age band's opinion in just six years.

This is where a statement from the NCCS is useful to the ministers and the bureaucrats. It refreshes their basis for claiming that Singaporeans are against liberalisation.

But why is a government that by policy is proud of its secular credentials, so unabashedly biased against GLBTs?

In a large way, it is not. Being anti-gay is not high up there among the government's priorities. What is high up there are its authoritarian instincts, which tend to privilege stability and conformity over experimentation and diversity. On social issues, the status quo is automatically preferred over change. Controversy is to be avoided because authority is harder to impose in such conditions. Thus on the gay issue, there is a resistance to change simply because change is seen as destabilising.

Yet Singapore is among the fastest-movers when it comes to economic restructuring. This is how the city-state keeps ahead of challenges. Economic restructuring, however, is painful, more so than ever in this age of globalisation. Lots of people resent the uncertainties and anxieties that result. There is more than a whiff of suspicion that the Singapore government tries to mitigate unrest against its economic policies, but offering a sop in the form of social conservatism.

Nonetheless, that the government and bureaucracy are prone to homophobia is well known, going by the numerous petty examples of censorship and denials of permits on flimsy grounds. Partly, it is due to the disproportionate representation of Christians in government and the civil service. Some of these individuals - though surely not all -- are already homophobic due to their religious upbringing and affiliation, and they tend to assume that the rest of Singapore must be like them. That is why statements like what the NCCS issued are significant, serving to reinforce their pre-existing bias.

Contesting the statement
There is no need to get into a debate about scripture. However, it can and should be pointed out that that there are plenty of Christians who would disagree with the line taken by the NCCS.

In the first place, not all churches belong to the NCCS. The Singapore archdiocese of the Roman Catholic Church, for example, does not, though that church is no less homophobic. But even those churches that are in the NCCS, e.g. the Anglican and the Methodist Churches in Singapore, would find their stance contested by Anglican and Methodist churches in other countries. That the local bishops' positions are hardly the last word on the matter is worth bringing to the public's attention.

The other thing worth pointing out is that Christians form a small minority in Singapore, at most 20 percent of the population. To this, the churchmen tend to respond by saying, "All major religions abhor homosexuality" - a stock phrase that comes from the fundamentalist churches of America. This is patently untrue. Buddhism and Taoism (about 50 percent of Singaporeans) have nothing to say on the subject. Nor does Hinduism, I am told, if one removes the Victorian prudishness that has blanketed it. Not least, let's not forget that there are atheists and free thinkers among us.

What this leads to is the charge that church leaders are expecting the government to impose Christian ideas of morality on non-Christians through law. This is the truly abhorrent idea. It is abhorrent to a secular state that promises freedom of religious belief and practice to its citizens to allow any religious group to dictate the laws of the land. That is why the NCCS statement must be resisted.

Alex Au has been a gay activist for over 10 years and is the co-founder of gay advocacy group People Like Us. Alex is also the author of the well-known Yawning Bread web site.
gay, singapore, lesbian, Christian, homosexuality, anti-gay, church, methodist, sinful, abhorrent, deviant, right, fundamentalist
Singapore