Fridae's Beijing correspondent Dinah Gardner travels to Lhasa, Tibet and speaks to young gay and lesbian Tibetans about their lives in the city's small yet flourishing queer scene.

How gay friendly is the Dalai Lama? Well, the charismatic exiled leader of Tibet says he supports gay and lesbian rights. But only for non-Buddhists. Same-sex intercourse, he says, is simply wrong for believers of his faith. In that case, he might be a tad unhappy then, to learn that Lhasa, capital of his estranged Himalayan kingdom, now has a small yet flourishing queer scene. 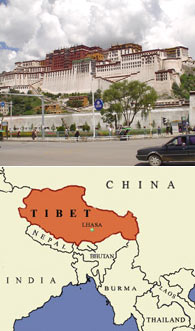 Lhasa's iconic Potala Palace
It's hard to find, but the city does have a gay bar. Yeshe, a 20-something gay Tibetan who is working as a bar manager for a tourist restaurant in Lhasa, says Lanse Tian Kong (Blue Sky) is quite hidden, but "there are so many gay boys who go there, especially on Friday's and Saturday's. It's packed." To protect it, its location won't be given here.

There are also popular cruising spots in the city, says Tenzin Tsetan, a gay Tibetan from India, who runs gaytibet.blogspot.com, a blog with resources on gays and lesbians in the "autonomous region" and Tibetan communities around the world.

"As for gays in Lhasa, I think the way they meet each other is mostly through cruising," he says. "There are certain public parks and toilets where they tend to go and meet."

"It seems like there is an underground gay scene in Lhasa," he adds, "but the community is not vibrant and open and nor is there a support group."

According to a local lesbian, there are no dyke bars, and girls will rarely go to Blue Sky bar. "We meet each other through friends, or normal bars, or through the Internet," says 30-year-old Lhundrop.

Lhundrop is wearing baggy jeans and a loose blue sweater. Her hair is cut short and spiky like a typical Chinese T (tomboy).

It's doubly difficult for gay Tibetans since not only are they living in China, which is not big on gay rights, but according to their spiritual leader, gay sex is condemned as a sexual misconduct. Even so, some scholars say that in old Tibet, gay sexual play between monks was very common.

"Some people - the younger generation accept homosexuality, but most Tibetans cannot accept it," says Lhundrop. "I have never told my parents. They are really traditional. They don't have any experience of this, but I think if I told them they wouldn't reject me."

Whereas many closeted Chinese lesbians and gays are pressured by their families to get married, Lhundrop says her parents have given up pushing her.

"I just told them that marriages between men and women in Tibet aren't really stable these days, there is so much divorce," she smiles. "Even my parents got divorced, although they are back together now. So I use this as an excuse, I say I don't want to get married because it will only end in divorce and they accept this and don't pressure me any more."

She says she is serious about finding a "wife" later and adopting a child.

"I definitely want to settle down later with a girl." The table of her friends - a lesbian couple and a gay boy - erupts into laughter. She explains that she's a bit of a player. "I have had a lot of girlfriends - usually they last about a week."

Despite a lack of Tibetan gay role models - Tibetan-born crooner Han Hong, is rumoured to be a lesbian but has never publicly come out - Lhundrop says she knew she was a lesbian from the beginning.

"I have never had any feelings for boys, and so I've always known I'm a lesbian. I had my first girlfriend when I was 15 years old."

Tenzin says the gay community is mixed between Chinese and Tibetans, which raises another problem. The relationship between locals and Han migrants is tense. Many Tibetans resent their presence in their city.

This sour relationship is clear at the table. Yeshe says that all the money boys at the Blue Sky bar are Chinese, while Lhundrop says she's dated Chinese girls but much prefers Tibetans. "I'll never settle down with a Chinese girl," she says.

One of the main problems, says Tenzin, is that there is so little visibility for gay Tibetans.

"Among the Tibetan communities both inside and outside Tibet, there is zero visibility of homosexuals although we do exist. On 9 December, two members of the Tibetan gay community, Tenzin and Jampa, both Tibetan expats living in the US went on air on a Tibetan webcasting forum and spoke openly about their lives as gays. This was the first time any Tibetan came out publicly."

In that case, what a great move it would be for Tibet's new generation of lesbians if Han, provided she really is gay of course, had the balls to come out to her public.