Was MM Lee Kuan Yew asking a rhetorical question when he said, "Why should we criminalise it [homosexuality]?" Singapore's pioneer gay activist and Fridae columnist Alex Au picks his remarks and related media reports apart.

Speaking in riddles - that's what sages are supposed to do. Singapore's former prime minister, 83-year-old Lee Kuan Yew, who is still in the cabinet as Minister Mentor, seemed to have done just that last Saturday night. 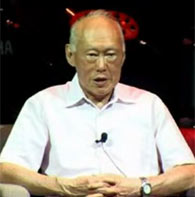 In fact, I can see two riddles. The first arises from the differences in the Straits Times' reporting of his words. There was a noticeable change in emphasis from the Sunday report to Monday's. Why?

The second was, of course, what exactly did Lee mean when he said what he said. Careful analysis of his words indicate a few knowns, but leave just as many unknowns.

The newspaper riddle
What did he say? To some extent, that depends on whether one is relying on the Sunday or Monday story in the Straits Times.

The Sunday version couched Lee's words in terms of how Singapore's handling of censorship would evolve as the world changes. First, Lee talked about Crazy Horse, the nude girlie revue that recently folded for lack of business, but nonetheless whose official permission marked a milestone of sorts for the government.

This was how the Straits Times' Internet edition on Sunday (22 April 2007) reported it:

'I said you either go with the world and be part of the world or you will find that you become a quaint, a quixoted, esoteric appendage of the world,' Mr Lee said.

But does that mean everything gets the go-ahead?

The newspaper then said the gay issue was one instance of a "not quite."

Mr Lee gave the example of how Singapore has dealt with the homosexuality issue.

'You take this business of homosexuality. It raises tempers all over the world and even in America! If in fact it is true - and I've asked doctors this - that you are genetically born a homosexual, because that's the nature of the genetic random transmission of genes, you can't help it.

'So why should we criminalise it? But there's such a strong inhibition in all societies - Christianity, Islam, Hindu, Chinese societies and we are now confronted with a persisting aberration. But is it an aberration? It is a genetic variation. So what do we do? I think we pragmatically adjust,' he said.

So what did he mean by "pragmatically adjust" in the light of "strong inhibitions"? How much adjustment did he envisage?

Nonetheless, you would have noticed that the report indicated that while the government would be "pragmatic," there was still reason to criminalise it. There were objections from many quarters, he said.

However, in Monday's edition of the Straits Times, the angle was quite different. Lee's words were re-paragraphed thus:

'If in fact it is true, and I have asked doctors this, that you are genetically born a homosexual - because that's the nature of the genetic random transmission of genes - you can't help it. So why should we criminalise it?'

You'd notice that the sentence "Why should we criminalise it" got transplanted from the second paragraph to the first, where it now sounded like a rhetorical question.

The headline too emphasised the new angle. "Govt not moral police" it said.

It's hard to say what happened between Sunday and Monday. Perhaps the editors themselves reviewed the transcript and felt that overall, Lee was being more positive than negative, or, Lee's office could have telephoned the editors to tell them their (Sunday) reading of his words were off the mark.

Either way, it does seem to suggest two things:

Firstly, the question of homosexuality preoccupies the government's mind to some extent. Of countless things that Lee could have spoken about to illustrate necessary change in the years ahead, he chose to talk about homosexuality. For decades, the knee-jerk reaction used to be that the status quo was fine and gay rights was a non-issue. In this sense, to have forced our way into the cabinet's consciousness could be read as a positive development.

Secondly, the thrust of what he was saying was that the government "have to take a practical, pragmatic approach to what I see is an inevitable force of time and circumstance."

He was acknowledging an end-point - "an inevitable force..."

Two certainties?
This brings us to two things that we can read with some certainty from Lee's words. The first is that the government now seems to acknowledge that eventually, Singapore needs to bring itself abreast of social trends.

Secondly, Lee himself appears to be increasingly persuaded that homosexual orientation is innate. Notice his words about "genetically born a homosexual." My own reading of the scientific literature is that it is more complex than that. Genes do play a role, but so do other biological factors. However, as far as I can see, no reputable study has shown a significant role for social factors, despite the best efforts of the religious rightwing to promote such a notion.

But I won't get into that here. It is enough to note that effectively, Lee dismissed the religious construction of homosexuality. He said, " But is it an aberration? It is a genetic variation. So what do we do?"

The time frame riddle
Lee spoke about adjustment and being pragmatic. However, let's not assume that the end-point is anytime soon. He didn't say that the change we would like to see would come tomorrow. It could be 20 years hence. That's the next riddle.

One theory is that he was merely trying to counter demands from the religious rightwing to actively prosecute gay people. Some churches had recently called on the government to criminalise lesbian sex. And recently, church newsletters have been running articles reiterating their ideological positions on the "sin" of homosexuality.

Lee's words, "let's not go around like this moral police... barging into people's rooms. That's not our business," should, according to this theory, be read in this light.

The other, more optimistic, theory is that the government is indeed considering further moves. The Law Society, after all, has recently recommended complete repeal of Section 377A of the Penal Code, which makes sex between men an offence punishable by up to two years' imprisonment.

There are many ways to read the tea leaves. We'll just have to keep up the pressure and see. Our work is not yet done.

Alex Au has been a gay activist for over 10 years and is the co-founder of gay advocacy group People Like Us. Alex is also the author of the well-known Yawning Bread web site.
gay, singapore, homosexuality, penal code, lee kuan yew
Singapore