open letter to the prime minister submitted with 8000 signatures

The Open Letter To The Prime Minister of Singapore containing over 8000 signatures has been delivered to the PM's office at the Istana on Monday.

Organisers of the Open Letter To The Prime Minister has hand delivered the 400-page letter with 8120 signatures to the PM's office at the Istana on Monday at 2.30pm. All signatories submitted as of midnight Oct 22 went towards the final document. 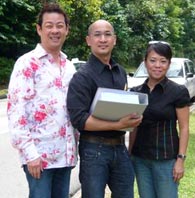 Ivan Heng, Alan Seah (centre) and Pamela Oei hand delivered the 400-page letter with 8120 signatures to the PM's office at the Istana.
The letter was delivered by co-organiser , owner of former nightspot Happy, and was accompanied by actress Pam Oei who appeared in the widely publicised Youtube video and playwright/ theatre director Ivan Heng.

Seah told Fridae, "It's as if 8000 people walked up to the Prime Minister and shook his hand, introduced themselves politely and respectfully but firmly explained their heartfelt views on this important issue.

"It is clear from the debate in Parliament yesterday that many Singaporeans still have many misconceptions about the gay community and what this whole issue is about. There is a real lack of understanding. I hope the Open Letter will help explain why we feel it is so important that the discrimination against us must end. And that we need the leadership of our Govenment to help end it."

Launched on Oct 5, the letter which urged the abolishment of Penal Code section 377A is in response to the current parliamentary debate where the proposed Penal Code is being read the second time.

The online Open Letter website will remain operational until further notice as an on-going record of this debate. You can see the Open Letter now in our 'Things You Can Do' section

I am 69 years old, a mother of a gay son who's in his 40s. He and his partner have been living with me under the same roof for more than 13 years. They are the best things that happen to me in all my 69 years in Singapore. Please tell me, Mr. PM, why are you teaching me to be ashamed of them? If this country doesn't want them, where can they go? Please tell me.
- Mak Oon Ling

My son is gay. He came out to me when he was 22. And I was upset and I blamed myself why is my son gay... I blamed myself all the time. But he is my son. He has not changed since the first day i gave birth to him or the person he is today. I love him for who he is, for what he is. It sickens me that people think suggests that just because he is gay, our family isnt what it is. We are a family. What people do in their private lives shouldnt be an issue to anyone aslong as it doesnt harm anyone else. He doesn't know i am doing this but I support this repeal. He is my son and he is not a criminal. If I can accept him, his mother who gave birth to him, who these people who so quickly judge him and condemn him?
- Karen

I am a Singaporean residing in Germany with my German male partner. My company and host country RESPECT me, my partner and our homosexuality with no discrimination. I hope to return home to Singapore one day with my partner to serve HER as proud sons with human dignity and rights. But, we often struggled inside us: "Do we want to continue living in Germany as "free" men or return home to Singapore hiding as "criminals"?" Like all proud Singaporeans, I only ask to be able to return home a dignified Singapore gay son, and not a "criminal" I was never borned to be. I, therefore, support the repeal to have Section 377A abolished.
- Oh Hock Chong

Abolishing Section 377A of the Penal Code will not contradict the Government's stand of promoting Family values. It will actually send a clear signal that we should accept our fellow citizens and family members as they are. My vision for Singapore is one where its youth can develop to its fullest potential instead carrying the heavy burden of leading a double life. Singapore should be a place where we can respect each other for who we are. Having such a nurturing environment will enable our future generations to take Singapore to greater heights.
- Dr. Alvin Koh

The question is not whether the law should reflect conservative values, it is whether gay people should be put in jail for sexual acts between consenting adults. The law is not meant to placate any section of the community with political clout, it is meant to protect those without.
- Alfian Sa'at