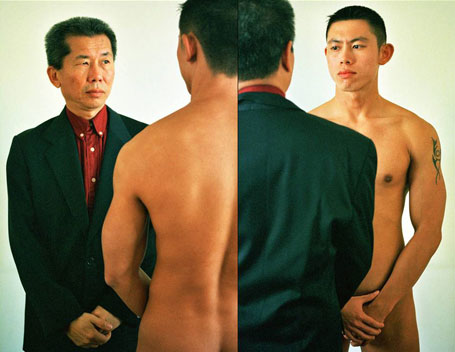 the climate is changing

Using Men Like Me - an ongoing exhibition in Melbourne showing the work of 8 Asian photographers - as a springboard, Martin Lum contrasts the Australian and Asian expressions of masculinity, and Australia's opportunity to see a different perspective of Asian men.

One thing's for sure, Australians know how to party! Sometimes it runs off the track, like for teenager Corey Delaney who reached global notoriety this week for his riotous house party in Melbourne. Last month, the Australian election was another cause for Australians to party, when it ended the Howard government and the Pauline Hanson anti-Asian rhetoric. Kevin Rudd and his family gathered on stage to claim victory but the country's eyes opened to something fresh and exciting. Instantly the Asian face of Albert Tse standing behind the Prime Minister elect became a cult phenomenon. "How can I contact Mr Rudd's son-in-law, what a hottie!" headlined the Internet blogs. 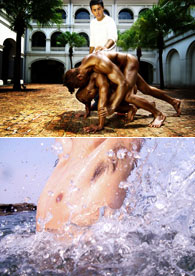 Top of page: William Yang's self-portrait 'Alter-ego.' Above: Yan Tuck Hong's Wrestlers (gold) and Hiroshi: At Miura Beach by Taguchi Hiroki (bottom pic)
Asian men in the Australian landscape have been all but invisible, and they had never before been described as 'hotties.'

Garrie Maguire has been long-time passionate in his creation of space in the art-scape for Asian men. "My work has always been inclusive and reflective of the Asian men I see around me," Maguire says. Curator for Men Like Me, an exhibition of photography for Midsumma Melbourne, opens the eye of Australian audiences to Asian faces like Albert Tse. Maguire asks the same question, "How can I contact him, he's a hottie!"

Speaking with Maguire before the opening of Melbourne's Midsumma festival you get a sense that this has been long time coming.

"Kevin Rudd and I even went to the same High School," Maguire proclaims. Then you notice he's wearing a polo shirt from Nambour State High - their shared history runs deep. How is it that Rudd and Maguire, with formative years in Queensland led them both to embrace Asian identities? "I found the Australian masculinity rather brutal," says Maguire. "When I moved to Sydney, my first encounter with Asian men was amazing. Their sensibility was so different to the men I grew up with."

"You identify yourself as a rice-queen then?"

"Not at all. It was a revelation to discover different expressions of masculinity. The Australian Anglo-Celtic ideal of maleness is trapped in adolescence - he values sport, and larrikin physicality. The Asian men I met weren't like that."

Maguire is researching the visual space of masculinity in Australia; he explores where Asian men fit into this culture.

"I am drawn to the work of Kam Louie," he explains. The Professor of Chinese makes in his book, Theorising Chinese Masculinity, the distinction between the intellectual family-oriented 'wen' man and the martial-physical 'wu' man. In both forms, self-control is an essential manifestation of the Asian concept of 'face' - an unyielding moral and sexual code.

"Not only do Australians value the physical man more, they also lack the self control of Asian masculinity," says Maguire. With this emphasis on the unrestrained, physical expression of masculinity by Australians, "the Anglo-Celtic perspective of Asian men reinforces a stereotype of the nerdy, feminised and sexually passive male."

"What is exciting about Queer theorists," argues Maguire, "is that masculinity is able to be re-interpreted outside of the 'feminist' paradigm - queer men view other men without reference to feminism." In critical theory, intellectual thought on gender studies grew from feminism, then the study of masculinity was positioned in contrast to feminist constructs. The contribution of Queer theory allows a re-interpretation of masculinity without this feminist construct - it is thus a new masculinity. This rationale under pins the importance of this exhibition - beginning with a Queer view of masculine desire, it overlays an alternative perspective which comes from Asian masculinity.

The exhibition, Men Like Me is as much about a new post-feminist masculinity, as it is about Asian men. Maguire has assembled examples of photography produced by queer Asian men of Asian men.

Men Like Me is anchored with third-generation Australian-Chinese artist William Yang's images of Asian men in China and in Australia, but gravitates to Yang's self-portrait, 'Alter-ego'. Here, our queer elder, Yang, is mirrored with a youthful Asian male. Is Yang recasting his Australian heritage with a powerful new Asian image of his past?

In one of Yang's monologue performance pieces, Dumbullah, he discovers his otherness. "I went to my mother and said, "Mum, I'm not Chinese, am I?" And my mother looked at me very sternly and said, "Yes, you are." I knew in an instant that being Chinese was a terrible curse." In this single image, Yang stands proudly, and in part quizzically, Chinese and Australian. He exorcises the ugly spectre of a recent Gaydar profile - "Aussie man seeks sexy male - no fems, asians or weirdos." It is an attitude that many men in Australia have internalised - including some Asian Australians.

Maguire supplements Yang's vision, with provocative visual statements by Michael Shaowanasai. Self-proclaimed as Thailand's 'most controversial artist', Shaowanasai makes a direct assault on the feminisation of Asian men. He lampoons and contests the globalised racial hierarchy of a feminine Asia to the masculine West. Paradoxically he challenges the gender stereotypes by adopting pantomime cross gender characters. It is a position in which Maguire acknowledges with some discomfort.

"I'm concerned that these imagines can reinforce the feminisation of Asian men." And it cuts across the post-feminist queer theory. Shaowanasai's cross-dressing is overt parody in a way drag queens arguably are not - he reclaims visually a masculine self. It parallels our linguistic inversion of the taunt 'queer' insult into an expression of identity and pride. Shaowanasai has exhibited at the Venice Biennale and produced work during residencies in locations as diverse as Slovenia and New Zealand.

Other photographers in Maguire's Men Like Me speak from different queer Asian lives. Marcus Mok and Yang Tuck Hong from Singapore, Norm Yip in Hong Kong, Koky Saly Cambodian-Australian, Hiroki Taguchi in Tokyo, and Vietnamese-American Justin Thai. Between them they bridge the cultural divide between east and west. The work of Mok and Yip positions the Asian man in the muscular youth cult, perhaps in direct competition with western hyper-masculinity. In contrast, Thai shows the softer sensual man without feminisation - arguably the metrosexual Asian male.

Madeleine Albright, former US Secretary of State, writing this month in the Washington Post, argues for America to restore its values. "We are four percent of a planet that is half Asian, half poor, one-third Muslim… our reputation is in disrepair," she laments of a culture embraced with fear. One manifestation of fear is an unwillingness to think seriously about alternative perspectives."

It is a sentiment, like the recognition of climate change that has been long time in coming. It might be argued that Kevin Rudd fluent in Putonghua, and his 'hottie' son-in-law Albert are symbolic of Australia's opportunity to restore our cultural reputation, to see a different perspective of Asian men, and to embrace the new masculinity that Men Like Me displays.

Martin Lum is a Melbourne based writer and commentator. Midsumma is Victoria's annual gay and lesbian, arts and cultural festival. It will run from Jan19 - Feb 10. Men Like Me opens in Melbourne on Monday, Jan 21, 2008 at Off The Kerb, 66b Johnson Street, Collingwood. Until Saturday, Feb 9, 2008.