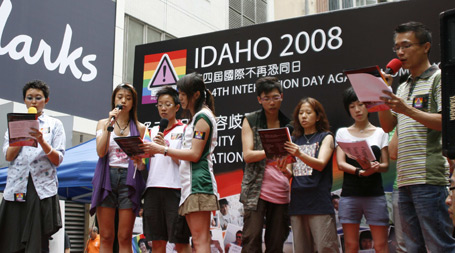 Instead of a march which has been traditionally held since 2005 to commemorate International Day Against Homophobia, a group of mostly straight students marched under the banner 'Straights for Homos' last Saturday while IDAHO organisers held a rally in Causeway Bay on Sunday.

Hong Kong may not yet have its Pride March, but it has marched for three years running on IDAHO day; last year about 600 marchers went the considerable distance from Causeway Bay to Central to make a collective stand against homophobia. For this year's IDAHO day, people from some twenty-four groups involved in tongzhi issues in Hong Kong got together in two locations separated by the harbour and spread over two days. Fridae.com was appointed the official gay online media. 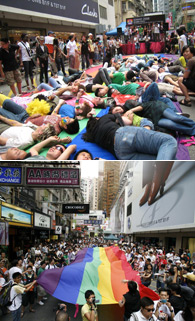 Top of page: Organisers of the event including Tom Cat (extreme left), Ah Lik, Connie Chan (second and third from left respectively) and Ken Chai (extreme right) at the IDAHO rally at Causeway Way on Sunday. Photos courtesy of IDAHO HK committee.
This year, the 4th IDAHO celebrated in Hong Kong, was marked in a considerably different way. On the first day, Saturday the 17th, the running (or rather I should say the marching) was organised by a group of mostly straight students who turned out to support their minority fellows. Kowloon was thus privileged to see what we think was its first march in support of tongzhi (literally meaning comrade, the term is frequently used to refer to LGBTs) rights conducted by the Hong Kong Federation of Students. Their Social Movement Resources Centre has a group called Autonomous 8A, which decided, under the catchy banner of 'Straights for Homos', to show that the morality of the majority in Hong Kong is not at all of the fundamentalist Christian kind. And why the use of the word 'homos', not exactly one of the favourite labels on most of our lips? To reclaim it, as 'queer' has been reclaimed, from those who use it to foster hatred, according to this group.

About 70 of them and their supporters gathered at a public garden in Sham Sui Po, where two leading 'participants' in their IDAHO Working Group (they are famously democratic and won't admit to having leaders), Choi Fung and Dominic Fok, harangued both the marchers and the crowd of rather bemused locals who were sitting about the park eating their lunch or reading their papers in the sunshine.

The march set off down the centre south bound lane of Nathan Rd, in two hours covering the entire length of the road as far as Yau Ma Tei, right through the shopping centre of Mongkok and halting all traffic as it passed. The loudspeakered chants (broadcast to speakers at back and front of the column from a neat mobile electronic platform, pushed down the road on wheels) could not be avoided by the massed crowds of shoppers held back all along Kowloon's principal thoroughfare behind blue police tape. At the junction with Waterloo Rd, the march halted under a 50-foot poster displayed high above the ground. Placed there by a fundamentalist Christian group, it stated (in Chinese characters) "We want a holy and pure city. We don't want a city full of sex and erotics;" this advertisement had apparently been put up in several sites in the city following the recent photographic debacle by Edison Chen, but the marchers used it as the key to shouting out to the spectators massed around the junction slogans illustrating the kind of Hong Kong they wanted, one free of discrimination and fear. After some more speeches, the marchers dispersed from the gardens in Temple St.

That evening, the same group arranged a public forum to discuss the plight of tongzhi students at secondary school: could they date, could they be treated as couples, and other similar questions. This debate aimed to mirror one held some 15 years ago on the same subject for straight students in Hong Kong. Straight tongzhi supporters have been making news here in Hong Kong over the last few months. In April, Dr John Green, a straight teacher at Li Po Chun United World College of Hong Kong, bravely protested the College's action in inserting wording into its teachers' contracts of employment to restrict the benefits given to their married staff to couples who were one man and one woman. Dr Green could not stomach this and resigned. It is good to see that a growing number of the straight majority in Hong Kong is changing its mind and is not afraid to say so.

Those who gathered in Causeway Bay on Sunday, May 18. were this time LGBT men and women protesting their own rights. They numbered some 300, representing almost all the tongzhi groups in Hong Kong. Interestingly, these included several liberal religious bodies, amongst them the Blessed Minority Christian Fellowship, the Hong Kong Christian Institute and the Spiritual Seekers Society, who led the meeting at one point in singing and in testifying that many Christians support the struggle against discrimination based on gender. For this year's main IDAHO event extended the usual theme of protest against homophobia to include discrimination against anyone, as the literature put it, 'not embraced by binary gender concepts': the transgendered, the transsexual and the cross dressing. The pedestrianised East Point Rd, behind Sogo, was cordoned off for the crowd which gathered in front of the platform and around the large rainbow flag which covered most of the tarmac. On this, many of those present lay down in turn to symbolise the victims of the nine cases read out from the platform of discrimination and oppression, while others around them joined hands.

On the platform, the event's two presenters, Tom Cat and Ken Chai (Kenneth Cheung Kam Hung, the coordinator of Hong Kong's Rainbow Centre), led a team of volunteers who read and sang throughout the 2-hour session. At the end of the day, they explained the reason for the lack of an IDAHO march on Hong Kong side this year. Hong Kong will see its first pride march in October, and the IDAHO organisers preferred not to steal the limelight.

The anthem written for this year's IDAHO protest, sung enthusiastically in both Cantonese and English by the crowd, put it clearly: 'Queer are ready' (and they really did sing 'Queer', rather than 'Queers'), at the least, for a really massive turnout in October to show what is left of the majority that has yet to face the fact that we are here and that we will no longer tolerate the discrimination of the past.

The date or venue of the Pride celebration has not been announced but watch this space for updates.