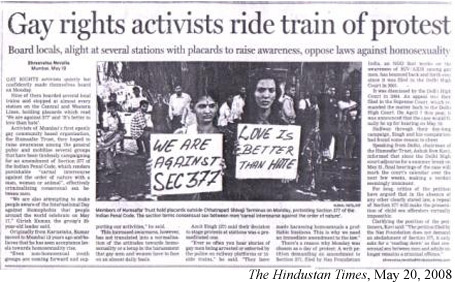 Fridae's special New Delhi correspondent for the case, Mayur Suresh, reports on the proceedings of May 22.

Click here to read the proceedings on Monday, May 19.

Delhi High Court - Proceedings on May 22, 08
(The Bench did not sit on May 21 as originally scheduled.)
Naz Foundation (India) Trust v. Government of NCT, Delhi and Others 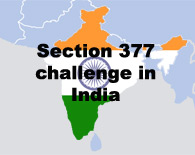 Mr Anand Grover, counsel for the Naz Foundation, continued his arguments in the case challenging the constitutionality of India's anti-sodomy law, Section 377 of the Indian Penal Code, 1860.

He argued that Section 377 was so wide that it covered even consensual sexual acts committed by adult men in the privacy of their homes and said that the State needed to show an overriding interest that would justify such a severe intrusion into the privacy of homosexual men.

Mr Grover argued that, contrary to claims made by the Federal Home Ministry, morality is not an overriding concern that would justify the limitations on the right to privacy. He argued "While people may be shocked, disgusted or offended, this is not sufficient a reason to intrude into the bedrooms of homosexual men." He further stated that the High Court has to decide whether the deemed immorality of certain acts was a sufficient reason to make them criminal.

He brought it to the Court's notice that a number of Asian countries, which have similar cultural mores as India, either never had criminalised homosexual sex, or have recently moved to decriminalise it and pointed to the laws of Nepal, Fiji, China, Cambodia, Thailand, Indonesia and Iraq.

Referring to the arguments that the opponents of the petition made, that homosexuality leads to the break up of the family and that laws against homosexuality would prevent homosexual men from seeking liasons elsewhere, he stated that often gay men are forced into marriage in order to conform with dominant heterosexual mores in the country. He further argued that the Section 377 of the Indian Penal Code has never and will never prevent gay men, married or otherwise from having sex with other men and only further serves to deepen discrimination and prejudice against gay men.

He said that the Naz Foundation, the party challenging the anti-sodomy law, was only asking for consensual acts to be decriminalised. Thus Section 377 would still be applicable in cases where the sexual acts were non-consensual, and done under coercion or force.

Rubbishing the argument that the striking down of Section 377 would lead to increased paedophilia, he argued that Naz Foundation was only asking for the decriminalising of consensual acts between those parties who could give valid consent and minors clearly could not. As Justice Sikri put it "Just as minor girls cannot give consent to sexual acts under section 375 (the provision on rape), the same thing will apply here" (sic).

He also stated that a number of Government bodies had recommended the repeal of Section 377. In particular he pointed to the 172nd Report of the Law Commission of India which stated that Section 377 should be repealed and a new section be included to specifically deal with child sexual abuse. He stated that the complications with Section 377 arise from the fact that while it is used to target homosexual men, it is the only law available to counter child sexual abuse. And hence, following the lines of the Law Commission, the Naz Foundation was only asking for the Court to interpret Section 377 to exclude consensual acts between adults.

At which point, Mr Sharma, counsel for Mr B.P. Singhal, an intervenor in this case, stated that consent could never validate a crime and he referred to the United Kingdom House of Lords decision in R. v. Brown which upheld the assault conviction of men who were caught in the performance of sadomasochistic practices.

Mr Sharma further pointed out that this case was merely an academic exercise since there was no arrest, prosecution or conviction under Section 377 and hence the petitioners had no immediate reason to challenge the sodomy law. Ms Monica Garg, counsel for the federal Government then clarified that the Home Ministry's affidavit stated that Section 377 has not used against any persons.

Ms Vrinda Grover, counsel for Voices against 377, interjected that her client has filed affidavits to show that while arrests are rarely made that homosexual men, transgendered persons were illegally detained on a regular basis. She further stated that the police rarely register any arrests since they are merely out to make quick money off LGBT people who are easy prey because of Section 377.

Justice Midha inquired about the number of instances when the Section 377 has been applied by the prosecution. Mr Anand Grover clarified that there were 48 judgments from High Courts (appeals from orders of lower Courts) but reiterated Ms Vrinda Grover's point that Section 377 is used arbitrarily and arrests are rarely registered.

Counsel for the Joint Action Council Kannur, an opponent to the petition in this case, again pointed out to the fact that it is not tenable for two ministries the federal government to have two contradictory positions with regard to the same matter. The Court in response, requested that the Attorney-General be present at the next date of hearing to clarify the matter and to present the views of the federal government at the next date of hearing.

Given that the Court holidays begin next week, the Court posted the next date for hearing on July 2, 2008.

Reports in the Indian media about the case
Meanwhile in India's most populated city Mumbai, LGBT activists were making their voices heard. The Mumbai edition of the Hindustan Times on May 20 reported that "Gay rights activists quietly but confidently made themselves heard on Monday. Nine of them boarded several local trains and stopped at almost every station on the Central and Western Lines, holding placards which read 'We are against 377' and 'It's better to love than hate'. While in the southern city of Chennai (formerly Madras) local LGBT activists organised a condolence meeting for Christy Jayanthi Malar (38) and Rukmani (40), two married women who were in a relationship with each other. They were being forced apart by their families, and rather than being separated they committed set themselves ablaze. They passed away on May 18, 2008.

An editorial in the Indian Express on May 21, 2008, commented: "It is indeed unacceptable that in 21st-century India we still have a law which denies 'the right to love' to a section of the Indian population. If the constitutional promise of equality is to have any meaning at all, then homosexuals too, like heterosexual married couples, should have the freedom to engage in intimate sexual acts without being subjected to state harassment… The question is whether India will live out the meaning of its creed as the world's largest democracy or will keep company with fundamentalist and tyrannical regimes, to be seen in certain parts of the globe, by continuing to retain the archaic Sec 377 of the IPC (Indian Penal Code)."
377, laws, activism
India