Born This Way But...

Journalist/songwriter Dr Ng King Kang publishes his second book on homosexuality in Singapore, a compilation of results from a survey of political and social attitudes towards gay men since 1990.

In 1999, Ng King Kang stunned Singapore with The Rainbow Connection, possibly the first upfront, unapologetic non-fiction book about gay people in this country. Written as his Masters thesis at Singapore's Nanyang Technological University (NTU), the book used a combination of firsthand accounts and sociological analysis to describe how Internet access was transforming Singapore gay culture. 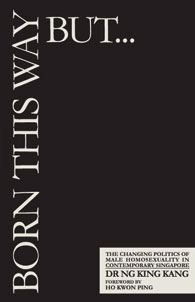 Now, nine years later, Dr Ng's come out with a new book, a sequel of sorts to the first, entitled Born This Way But…: The Changing Politics of Homosexuality in Singapore. Its title references former Prime Minister Goh Chok Tong's widely quoted remarks when asked by a Time magazine journalist in 2003 about the city-state's policies towards homosexuals: "So let it evolve and in time to come, the population will understand that some people are born that way. We are born this way and they are born that way but they are like you and me."

At its heart, the book is a compilation of results from a survey on attitudes to male homosexuals, conducted as part of his PhD at Deakin University, Melbourne. However, with its accompanying essays, it forms the most comprehensive printed work to date on the political situation of gay Singaporean men.

"[T]he social and cultural climate with respect to homosexuality in Singapore is changing," the work concludes. "From what was a very clear-cut, black-and-white negativity several years ago, there is now a developing understanding of the need to recognise that homosexuals make up a diverse society that is necessary for Singapore's economic competitiveness."

Dr Ng's a recognised figure in the local media industry, famed not only for his work in journalism - he's a Senior Correspondent with the Mandarin daily newspaper Lianhe Zaobao - but also for his creative output.

He's published 15 books, all written in Mandarin, except for the two on homosexuality in Singapore. These include a quartet of books on travel, his 2359 series, which is a collection of his weekly newspaper column, and his first book, Frivolous Days, which captured his undergrad days in NUS. Several of these books have been bestsellers - Frivolous Days, for instance, is now in its fourth edition and has sold more than 10,000 copies in Singapore alone.

He's also lauded as a particularly prolific songwriter, with hundreds of Mandarin songs under his bet. Since the mid-'80s, he's recorded four albums, won multiple awards for his popular TV theme songs, and been commissioned to write National Day songs twice. He's also a regular speaker on creative writing and a judge at the songwriting and singing competitions at NTU.

According to Dr Ng, his new book is an extension of the original project of his Masters thesis, which offered only a basic glimpse into the world of gay Singaporeans as they started to build furtive online communities. Since then, the gay community has grown in numbers, visibility and confidence - but it still remains marginalised by the government and media, who exhibit strangely contradictory attitudes on these matters, veering from apparent supportiveness to outright repression.

"The government has been saying that our society is still by and large a very conservative society that is still not ready to accept homosexuality," the author tells Fridae, explaining the impetus behind his work. "I wanted to find out how true this is, and to provide evidence, be it for or against the government's stand."

Interviewing hundreds of random 21-29 year-olds in Singapore from 2002 to 2003, Dr Ng gathered opinions on homosexuality and its intersections with education, government and the local media. While the results are decidedly mixed, he notes a clear shift toward tolerance among this younger generation of citizens, paralleling the greater freedom with which politicians and journalists are allowed to talk about the issue today. Yet while there's tolerance, there isn't yet widespread acceptance - many interviewees remain convinced of the latent immorality of homosexuality. There's still a long way to go before we can treat it as a political issue with maturity.

One note of optimism, however, occurs with the publication of this book. Ho Kwon Ping, Chairman of MediaCorp and Singapore Management University, was willing to write a foreword for Dr Ng, despite being solidly, heterosexually married with children. "This book's publication takes issues beyond an academic realm and will provide thoughtful material for anyone, gay or straight, who cares deeply about the happiness and rights of all Singaporeans, and about the development of this Little Red Dot into a creative, compassionate, and cutting-edge society," he says.

As a well-researched text examining attitudes towards gay men in Singapore from 1990 to 2004, Born This Way But… is a milestone document in the formation of our country's queer culture. Thanks to Dr Ng, we'll have a reference to understand how far we've come and how far we have to go.

Born This Way But… is priced at US$35 is available on Fridae Shop.
book
Singapore