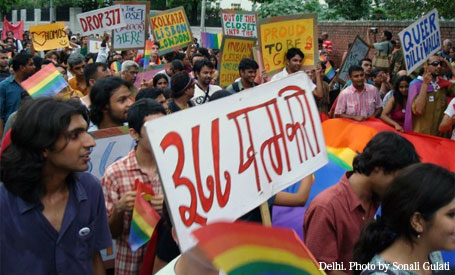 Fridae's Delhi correspondent Mayur Suresh reports on the three pride marches in the capital, Bangalore and Kolkatta on Jun 29 - the first time it has been coordinated on a national scale.

"Section 377 Quit India!" was on of the chants shouted at Delhi's first Queer Pride Parade on Jun 29, alluding to the 'Quit India movement' launched by Mahatma Gandhi in 1942, five years before India's independence from the United Kingdom.

In some senses, there's been a sense of history for the queer rights movement in the last couple of months. First, the Delhi High Court began hearings on the challenge India's sodomy law and on the on Jun 29, the cities of Bangalore and Delhi had their first Pride Parades, joining Kolkatta (formerly Calcutta) which has had its Rainbow Pride Walk since 1999.

This year's pride marches were certainly not the first public celebrations of queerness or of Lesbian, Gay, Bisexual, or Transgender (LGBT) identities in the country. Kolkatta's Rainbow Pride Week was first organised in 1999, and was made an annual event in 2001. In 2002, the Hijra Habba, or the Festival of Hijras (the generic name given to the transgender community in South Asia) was organised in Bangalore.

What is significant about this year? Firstly, the pride marches were organised and coordinated on a national scale with queer activists in different cities acting in concert with each other.

Mario D'Penha, a historian and queer rights activist in Delhi says: "It's really amazing that activists from around the country are coordinating the events. While each city will obviously lend its own flavour to the pride parades, it's great that we can speak about a national day on which people come out to celebrate queerness."

Secondly, and perhaps most heartening, is the number of people that attended the pride marches in the two cities. "We got a larger than expected turnout of about 700 people," said Siddharth Narrain, an queer rights activist in the southern city of Bangalore. Activists in Delhi estimated the strength of the parade at about 400 people although only 150 people were expected.

Kolkatta's parade attracted a crowd of about 400 people. The Rainbow Pride Walk in Kolkata, is part of a week-long celebration. Every year diverse human rights movements working in the city and nationally come together to organise film shows, art exhibitions, discussions and dance performances to in celebration of LGBT identities and to create spaces for dialogue and understanding devoid of hate, stigma and harassment. At this year's walk, people sang 'We Shall overcome' in an overcast as they walked from College Square and up the Esplanade. The walk ended with a candle vigil in the rain at Kandapara in memory of friends we have been lost to violence, HIV and abuse.

While there were no floats or go-go boys in Delhi's parade, the route of the parade was awash with colour. Loud cheers erupted as queer rights activists were joined by professionals, taxi drivers, families and friends and unfurled a 20 metre long rainbow flag. Hand held rainbow flags were distributed as the parade was joined by a duo of dhol (drum) players. Families, dogs and babies in strollers joined the parade as drag queens danced to the beat heady beat of the drums. Colourful masks were handed out to people who were not comfortable revealing their faces, a reminder that it is still a difficult struggle to be out in India. The parade ended with a candle light vigil at Jantar Mantar, a historic site in the centre of the city, a site at which many social movements have held protests and vigils.

At the vigil, Lesley Esteves - a writer and lesbian rights activist - made the point that while we must celebrate queerness, and the diversity of sexual orientations and gender identities, we must not forget that many people still live in the shadows of the law and discrimination by society. "This is for all the people who are still in the closet, this is for every lesbian that has committed suicide, this is for all the people who must live as people they are not," said Esteves who was nearly moved to tears.

Bangalore's march, titled Bangalore Pride, began at the National College grounds, passed through the historic centre of the city and one of its more conservative neighbourhoods and ended at the Puttana Chetty Town Hall where the crowd swelled to over 700 people.

Anniruddh Vasudevan, a writer who attended the Bangalore Pride writes: "One corner of the college grounds turned into a carnival zone in less than half an hour. More and more people arrived; hugs and laughter ruled for a while. Painting of faces followed. Some people wondered aloud if they should wear the masks, or paint their faces, or just walk as they were. The decisions, I could see, were very important to all of us… [It was] a psychedelic gathering of not just hijras, kothis, drag queens, sex workers, bisexuals, lesbians and gay men, but also our siblings, friends, and other allies… Then the drummers arrived. And the dancing began. With their superb dancing, the hijras, kothis and drag queens declared the parade open." The crowd wore t-shirts and held up placards, some of which said 'God Made me Gay' or slightly more tongue-in-cheek, '377 sucks.'

All this took place three days before the Delhi High Court was scheduled to resume hearings on a constitutional challenge to section 377 of the Indian Penal Code, India's sodomy statute. However, due to some procedural complications, the case has now been scheduled to be heard on Jul 21 by a bench headed by the Chief Justice of the Delhi High Court.

While there were some somber moments in all three cities, in memory of friends long passed and in solidarity with those still struggling to come out, overall, the pride parades were marked by music, colour and by a sense of joy and celebration. As one activist put it, "While it's also a protest, what we're really here to do, is to party, because we're happy to be who we are and we really need to spread the joy." And as Anniruddhan writes, "That the most spontaneous response to happiness is happiness, testifies to what is natural and what is not."

Mayur Suresh is a lawyer in New Delhi.

An estimated 400 people turned out for the march in Delhi while in Bangalore, the crowd is said to have swelled to over 700 people when the march ended at the Puttana Chetty Town Hall. Some participants who were not comfortable revealing their faces has chosen to wear masks during the march.
pride, activism, march
India