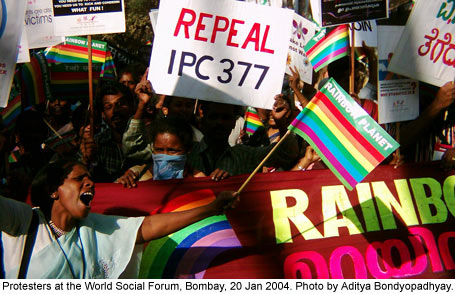 Gay men and lesbians in India and around the world are eagerly awaiting the court's verdict after the recent conclusion of a 12-day hearing which began on May 19.

The Delhi high court last Friday completed hearing arguments in the case and had reserved its judgment on a petition to deciminalise private consensual sex between adults.

New Delhi-based gay rights activist and lawyer Aditya Bondyopadhyay explained in an email to Fridae that although Section 377, which criminalises "carnal intercourse against the order of nature with any man, woman or animal", is technically gender neutral and is equally applicable to heterosexual and homosexual sodomy, its use has been mainly to target gay sex between men.

The petition was filed in 2001 by Naz Foundation, a nongovernmental organisation working on HIV/AIDS and sexual health issues.

Gay activist and founder of NGO Humsafar afar, Ashok Row Kavi, clarified in a media report that the petition does not seek a repeal of Section 377 so that child sex offenses and male rape can continue to be prosecuted under the reinterpretation of the section, that would then exclude consensual sex between adults.

While rarely used in actual prosecutions today, the petition says that the almost 150-year-old law is used to target and harass lesbian, gay, bisexual and transgendered people, as well as HIV/AIDS activists and NGO workers. The law is also abused by the police to extort money and to blackmail gay men. The section, which dates back to 1860, provides for life imprisonment, a term exceeding 10 years and a fine.

It is the first time an Indian court will deliver a verdict for the section. Similar laws have been struck down since the 1980s in the US, UK, Australia, South Africa and the US. As with India, the former British Asian colonies of Bangladesh, Brunei, Malaysia, Myanmar, Pakistan, and Singapore continue to criminalise same sex relations under provisions similar to Section 377 present in each country's penal code. Hong Kong repealed the section in 1991.

A bench headed by the chief justice of the Delhi high court, A.P. Shah, has asked the petitioners and the respondents to file transcripts of their oral arguments by Nov 17.

When court proceedings began in May, the Union health ministry and the ministry of home affairs, which are respondents to the petition, were divided on the petition with the former supporting decriminalising same-sex sexual relations and the latter against it.

The National AIDS Control Organisation which is under the purview of the health ministry, told the court through an affidavit filed in July 2006 that section 377 of the IPC "can adversely contribute to pushing the infection (HIV/AIDS) underground", besides making "risky sexual practices go unnoticed and unaddressed".

During the proceedings, additional solicitor general P.P. Malhotra who represents the Union government argued on various grounds to keep to the status quo. He argued against reading down Section 377 citing "public morality and decency" to warning of an "increase the chances of evil... i.e. the evil of HIV/AIDS."

Observers and gay activists have noted the judges as being fair and non-prejudiced as evidenced by the courts frequently demanding data and studies to support claims made by the additional solicitor general.

When told that decriminalising same-sex relations would further spread HIV/AIDS, the Hindustan Times quoted Chief Justice Shah as saying: "Please show material, research paper or any document even from other country to show that decriminalisation (of gay sex) would lead to spread of HIV.

"If your argument is correct then spread of HIV should have stopped in the country as the law has been there for many years. But it is not the case as many people are dying of the dreaded disease."

Last Thursday, advocate HV Sharma appearing for BJP leader B P Singhal argued that gay sex acts cause injuries to private parts of the people who "indulge" in gay sex and that it should not be allowed even between consenting adults.

The court responded: "In several countries where ban has been lifted (from gay sex), no one has claimed that the act is injurious. Even WHO does not say that it causes injuries to people involved in such acts. Do you have any material to substantiate the claim that indulgence in such acts causes injury to people's body?"

Sharma said no material is available as no such study has been done in the country.

To which the court retorted: "Human beings are same everywhere."

Gay activists in India say they are optimistic about getting a positive verdict given the judges' approach to the unscientific claims and anti-gay rhetoric made by the additional solicitor general in court.

Bondyopadhyay told Fridae: "While it would not be proper to speculate which way the judgement will go, I can say for sure that the reaction of the judges thus far have been positive, scientific, non-prejudiced, and strictly in line with what enforcement of fundamental rights demand. When this is contrasted with the near circus that the government lawyer (ASG PP Malhotra) and the counsel for Joint Action Council Kannur also known as JACK (a group that intervened in the petition) put up, the positivity of the court becomes even more stark. This gives us reasons for hope and optimism."

Vikram Doctor, a journalist and gay activist, whom Fridae asked about the case said he is hopeful given that the presiding judges are "probably the two most strongly human rights oriented judges" in the country. "And the way the hearings have proceeded - along with the ridiculous or malign arguments from the opposition - is making us cautiously optimistic of a favourable verdict."

But no matter what the verdict, both activists pointed at having won over the media as evidenced by the generally positive and close coverage of the court hearings.

Bondyopadhyay added: "The case in its course of eight years has itself been of enormous help to the LGBT rights movement in India. We have been able to mobilise, organise and unify at every turn and adversity that the case threw up. One of the most important successes has been the turning of the media, where all major media houses have now taken an editorial position against the continuation of 377."

The judges have not set a date to give the verdict.

Transcripts of court hearings are available on Alternative Law Forum.