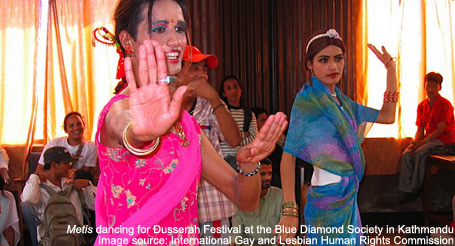 Nepal has become the first country in the world to officially recognise a "third gender" following the Supreme Court's landmark ruling last year; and same-sex marriage may be in the pipeline. Fridae speaks to Sunil Pant, Nepal's first openly gay Member of Parliament, for the latest developments.

Nepal's Supreme Court has reiterated its ruling in a written judgement released recently that the government must create or amend existing laws that discriminate against sexual and gender minorities. On Dec 21 last year, the Supreme Court of Nepal in a landmark ruling decreed that sexual and gender minorities are "natural persons" and as such should be guaranteed the same rights as other citizens. The ruling comes after Blue Diamond Society (BDS) – a pioneer LGBT organisation in Nepal, and three other LGBTI organisations filed a writ petition with the Supreme Court against the government, Office of the Prime Minister and Cabinet, Ministry of Law, justice and Parliamentary Affairs, and Parliament of Nepal.

Although Nepal has no laws that specifically criminalise same-sex sexual relations, "unnatural sexual acts" which are not defined may be punishable with up to 1-year in prison and/or 5000 RS (US$62) fine under the bestiality chapter of the country's civil (criminal) code, Sunil Pant, founder of BDS told Fridae in an email.

LGBTs as well as sexual minorities such as metis (biological males who typically have a feminine orientation and physical appearance but may or may not wish to undergo sex realignment surgery) face being harassed, abused and/or arbitrarily arrested and detained by Nepalese authorities under "public nuisance" laws.

Since last year's Supreme Court ruling, the government has started to issue identity cards to metis who have been previously denied any kind of official documentation without which one is unable to open a bank account, be formally employed, start a business, own a vehicle or get a passport.

Their identity card will recognise them as "Third Gender" and banks such as Everest Bank has changed its account opening form to include "Other" apart from male and female under the gender column, according to In Plainspeak, a publication of the New Delhi-based The South and Southeast Asia Resource Centre on Sexuality.

Pant told Fridae that applicants just have to apply at the central district office and medical tests are not required.

Contrary to media reports in September that a 21-year-old "lesbian" has become the first person in Nepal to be officially recognised as a third gender person, the scheme is not targeted at gay men or lesbians but individuals whose gender identity is not aligned with his or her biological sex, Pant explained. Pant has further clarified that the 21-year-old does not identify as a woman but as a third gender person.

The court's ruling will prohibit discrimination on the basis of sexual orientation and/or gender identity in the areas of employment, education, health care, inheritance, mobility, travel, and political and social participation.

In a press release issued last week by BDS, Pant, who's Nepal's first openly gay Member of Parliament and member of Communist Party of Nepal-United party, added that the legislature is expected to introduce non-discrimination provisions on the grounds of sexual orientation and gender identity.

Nepal abolished became a republic in May this year after the Nepal's newly elected leadership voted to end about 240 years of autocratic rule in the country. After a 10-year battle to overthrow the monarchy, the Communist Party of Nepal (Maoist) currently leads a coalition government.