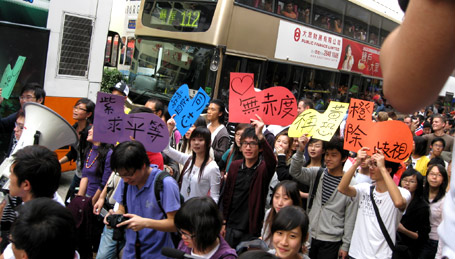 Although the Dykes on Bikes had to leave their machines at home and the event had to do without a double-decker bus organisers intended to rent, some 1,200 people turned out for Hong Kong's first official gay-pride parade on Saturday.

At last it has happened. Hong Kong's first gay pride parade processed through the crowded streets of Hong Kong Island on the afternoon of Saturday 13 December. And it was a huge success. Some 1,200 men and women, young and old, mostly gay but with some straight friends too, marched for just under two hours from the assembly point outside the Causeway Bay MTR entrance in Great George Street, one of the most congested places on the face of the planet, straight along the major East-West thoroughfare of Hennessy Road to its final destination in the public Southern Playground near Wanchai's station.

From the top: Hong Kong's first gay pride parade through Causeway Bay and Hennessy Road, Women's Coalition of the HKSAR, co-organiser Kenneth Cheung of Rainbow of Hong Kong, co-organisers Connie Chan and Ah Lik (left), LGBT bankers' group, Taiwanese contingent, Midnight Blue (male sex workers' support group) and Amnesty International Hong Kong
While Hong Kong has held three annual marches since 2005 to commemorate International Day Against Homophobia (IDAHO), this was the first official gay pride parade. Banners and flags marked the different groups who took part, making the half kilometre length of the march a rainbow coloured ribbon threading its way down a main street packed with shoppers and passersby. The mood of the march was joyous, everyone chanting slogans of love and equality to the beating of drums and the applause and waves of many onlookers and the crowds that thronged the bridges crossing the road to get a glimpse of a sight never before seen in Hong Kong. The passengers of passing trams joined in with waves, cheers and shouted greetings. Though there were some bemused and indifferent faces in the crowd there were no anti-gay protesters to spoil this very happy day.

The march was all on foot. Hong Kong's police, out in force and doing a very careful job of ensuring no one got knocked down by the still passing streams of buses and cars, had ruled, sadly, that Dykes on Bikes had to leave their machines at home. The only other vehicle organisers planned to have at the parade was a bus, both to be a focus for the parade and to provide a platform for its PA system and music. The bus didn't materialise. Citybus, the company that organisers approached to rent a double-decker, informed them several days before the parade that they are unwilling to rent them a bus. According to local media reports, the bus company reportedly said that although a bus was available, they considered various factors, including the "image of our company" when they refused the booking.

It was too late to rent another one, so everybody ended up walking and the kit went in a van, but it was not too late for a demonstration to be organised several days before the Parade outside the Citybus offices, where the company was called upon to account for what seemed to all concerned a blatant case of discrimination. This issue will not be forgotten and the Hong Kong Government has already taken the step of asking the company for an explanation.

At the Parade's destination a large platform had been erected in the sports ground and a programme of celebration was performed by the groups involved in the Parade to entertain the marchers and the public in the park. There were too many organisations represented in the 30 member Pride committee to list them all here, but the four principal ones coordinating the day were the Women's Coalition of the HKSAR; Rainbow of Hong Kong; Midnight Blue, the Hong Kong organisation reaching out to male sex workers; and the Social Movement Resource Centre Autonomous 8A, which had organised the highly successful 'Straights for Gays' march in Kowloon around the time of IDAHO earlier in the year. All these led the marchers in a declaration and pledge based upon the Pride Parade's theme of 'Celebrate Love'.

Midnight Blue's contingent, dressed in traditional costumes, showed off their Chinese Zang dancing skills. One of their leading members, Wai, who marched through the streets with his fellows in a police uniform just enough unlike the Chinese or Hong Kong Police's uniform to prevent his arrest for impersonation, and was a key figure in putting together the Parade's administrative back up, told me that he 'wished to show Hong Kong a happy celebration of what tongzhi(meaning comrade in Chinese but commonly used to refer to lesbians and gay men) meant' and hoped that the event would develop in future more and more into the kind of street party enjoyed in other major cities. He and similarly clad fellow members of Midnight Blue did their best to make this happen this time by divesting themselves of their uniforms in a Hong Kong version of 'The Full Monty' on stage. Bryan Chan, of Hong Kong's Dimsum Magazine (who has been known just occasionally to be seen in drag at tongzhi events), appeared this time as the glamorous 'Coco', but kept his clothes on, his sparkling bodice, plumed headdress and tight boots being far too splendid and difficult to remove. He belted out some old favourites from Anita Mui and Paula Tsui. No lip synching here!

Connie Chan, leading member of the Women's Coalition, and one of the Parade's coordinators, told me that she was ecstatic about the turnout. She said that the committee had planned initially for 250 people (this was, after all, the first Pride Parade in a city where it is still not easy to come out and where most find it more than hard to tell their parents, let alone to be open to their employers, about their sexual orientation). But this had rapidly become 500 then 1,000, and the numbers who came to march exceeded everyone's dreams.

Hong Kong was helped out by contingents from other Chinese cities: Beijing, Shanghai, Guangzhou, Yunnan and Gweizhou, all of which marched under identifying banners. Representatives from Taiwan also marched. From the platform, they all said they hoped to be able to repeat Hong Kong's success with Pride Parades of their own one day.

Two events completed the Pride programme. That night, just off Lang Kwai Fong in Central, at the newly opened bar Does Your Mother Know, a large number of those whose mothers did, and many whose mothers probably didn't, celebrated the day's triumph with an After Parade Party. Joint party organisers Abby Lee and Betty Grisoni, coordinators of the lesbian social salon Les Peches, told me that while the numbers of people at this first Pride were not so important as the fact of its being held at all, they were delighted that so many had had the courage to turn out. Eric Herrera of Fruits in Suits, the Hong Kong gay social network, and their fellow party host, echoed this and said that their party, a fundraiser for the parade, hoped to pay over HK$20,000 (US$2,580) to its funds, and was intended to end a happy day with a bang. Which it truly did.

On Sunday, 13 December, an event was held at Hong Kong's Baptist University to share the lessons of the Parade and to hold an open forum on many LGBT issues similarly affecting China, Hong Kong and Taiwan; living with AIDS, family relationships, civil rights and the use of the legal system in achieving them. The Baptist University is no stranger to hosting tongzhi events; Ken Zai, Rainbow Hong Kong's founder and leading member and a key figure in the organisation of the Pride Parade, had appeared here the week before to celebrate his organisation's 10th anniversary with a musical concert at which he personally performed a medley of popular songs, as he did again after the Parade in Southern Park.

Whilst the 30-member committee that organised the Pride Parade will dissolve after its conclusion, it will, in some form, re-assemble next year to plan 2009's Pride. The intention is make Hong Kong's Pride bigger and better as the years go by.
gay, pride
Hong Kong