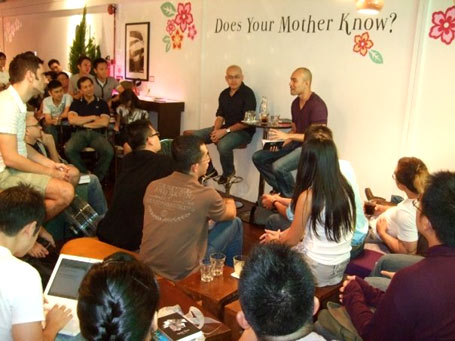 Johann S. Lee, author of Singapore's first gay novel Peculiar Chris, has made a breakthrough with his third book - it's far better written than any other gay novel from this country so far. Reviewer Ng Yi-Sheng attends the launch and weighs in on the story.

I'm at DYMK, the Chinatown gay bar and café where Johann S. Lee's holding a launch party for his new novel. He's treating us really nice - stuffing us full of his niece's cakes and specially thanking his hardcore fans in the room (everyone who listed him as their favourite author on Facebook got special invites). 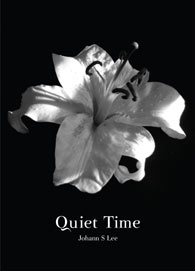 Top of page: Launch of Quiet Time at DYMK bar and café with Johann S. Lee and Nominated Member of Parliament Siew Kum Hong (left) on Dec 27, 2008.
After the reading's finished, theatre director Ivan Heng pops his head in. He tells me he couldn't take the intensity, so he's been sitting outside, reading the new book, and "it's wonderful".

I was doubtful. You see, Johann became famous in 1992 when he wrote Singapore's gay novel Peculiar Chris at the age of 21. In 2007, he published his long-awaited second book, To Know Where I'm Coming From. Both books were important as pioneering documents of gay Singapore culture, but both were also extremely flawed, with pretty bland literary styles and unconvincing characters. (You can read my mixed review of Johann's last book here:
Singapore