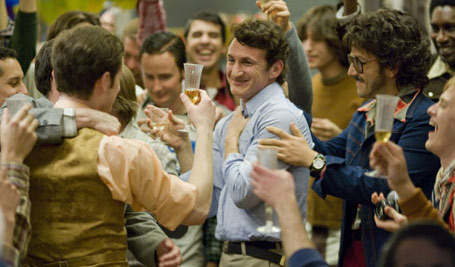 'Milk' gets 8 Oscar nominations, including best picture and actor

Some 30 years ago, Harvey Milk made the national headlines for becoming the first openly gay person to be elected to public office in the United States after three unsuccessful campaigns.

The San Francisco Board of Supervisors member was assassinated at the age of 48 after 11 months on the job. 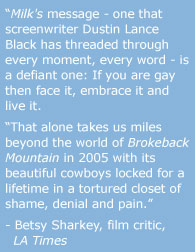 Film critic Betsy Sharkey at the Los Angeles Times wrote of the buzz surrounding the nominations:

"Today, the fact that Milk received eight Oscar nominations from the academy, including best picture, is significant and says much about where we are in our relationship, and comfort level, with the gay rights movement. In a word - improving.

"Why? Director Gus Van Sant's Milk is not a tentative film, rather it is openly, unapologetically gay. It begins with an introduction to a very fey Sean Penn as the still unrealised political activist Harvey Milk. On the night in question, he's a guy on the prowl for a hookup with another guy in the grimy underground of the New York subways.

"From there we are taken to San Francisco, the heart of the gay movement in the '70s, as we watch Milk's political passions rise. But there is also sex, everywhere; the film is saturated with gay experience, the nuance and many textures of gay life and all that it means.

"Milk's message - one that screenwriter Dustin Lance Black has threaded through every moment, every word - is a defiant one: If you are gay then face it, embrace it and live it.

"That alone takes us miles beyond the world of "Brokeback Mountain" in 2005 with its beautiful cowboys locked for a lifetime in a tortured closet of shame, denial and pain."

(Read more of her column at theenvelope.latimes.com.)


81st Oscar Nominees
The 81st Annual Academy Awards will be presented on Feb 22. For a complete list of nominees, visit oscar.com.