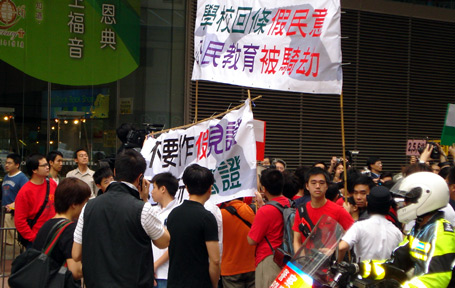 Something unique and very new emerged onto Hong Kong's streets on Sunday, Feb 15, an organised and vocal answer to the fundamentalist Christian right. Nigel Collett reports.

A brand new civil rights organisation calling itself the Civic Movement Network (CMN) has exploded onto Hong Kong's moribund human rights scene in the space of about a month, showing its strength (and reminding those of us who needed it of the power of the net) with a march through the streets of Kowloon.

A mere four weeks ago, Alva (Alliber) Chun, a Form 7 A-Level student and Mensa member, found himself so angered by the bullying behaviour of the religious right, and the misrepresentations they made in their campaign against the extension of the Domestic Violence Ordinance (DVO) to same sex couples, that he decided something had to be done. Determined to fight for the civic values in which he believed, he formed a Facebook group to gather like minded people and drafted its mission statement, which is:

"We call ourselves 'The Civic Movement Network.' We come from many walks of life including students, professionals, teachers and parents. Some of us believe in religion, others do not, but despite our differences we share a common belief. Together, we treasure the core values of our civic society - equality, human rights, democracy, rule of law, mutual dialogue, rational debate, tolerance, free and independent thinking, pluralism, transparent governance, care and concern for minorities and under-privileged groups, respect for an individual's rights and freedom to choose their lifestyles in pursuit of their happiness as long as others are not harmed."

Since 2005, when the Hong Kong Government first started half-heartedly to consult the public over a bill to outlaw discrimination on the grounds of sexual orientation, the Christian right has been making itself felt in Hong Kong. Over the last year, Hong Kong has seen a gradual increase in the activities of the Christian fundamentalist right. Advertisements placed at huge cost in Chinese newspapers abusing LGBT people; even more costly billboard posters on prominent street corners or tunnel entrances calling for conservative family values; letters to the press opposing extensions to human rights legislation and advocating an end to abortion; a deluge of letters sent to Government departments; vitriolic, intolerant and derogatory discussion of LGBT people at the Legislative Council (Legco) Committee considering changes to the Domestic Violence Ordinance (DVO), all these public activities were bad enough. But it has become very plain that the Christian right's activities have become more insidious in their threat to civic values. They have metamorphosed the small number of their publicly recognised organisations into a plethora of groups with the same aims and policies, all of which demand equal time and equal weight in public deliberations. This resulted in the hijacking of the Legco DVO committee sessions in January this year. They have leveraged their small numbers using the influential positions they hold in Hong Kong's education and social services.

Historically, Hong Kong's Government has delegated many of its education and social functions to Christian missionary organisations, and these now play a very vital part in Hong Kong's life. It is not possible for many parents to avoid sending their children to Christian schools, and many social services offered to the poorer members of society are channelled through Christian hands.

Whilst these are not all fundamentalist hands, many are, and at least some of these fundamentalists use their positions to proselytise and to further their conservative social views. Two recent examples of this tendency which have made Chun and his supporters anxious were, firstly, the campaign by fundamentalist teachers to instigate the sending of identical letters to Government departments and the Legco DVO Committee and, secondly, attempts to foist creationism onto the Hong Kong Secondary School Syllabus.

For some time fundamentalists inside the education system have taken advantage of the 'moral education' element in the curriculum to advocate conservative social views and in particular to abuse lesbians and gays. Their campaign against extending the DVO called forth a blizzard of letters against extending rights to same sex couples, letters issued by teachers to pupils for they themselves or for their parents to send. These letters were so suspiciously like official school letters that parents were led to believe that they had been asked to do this by their children's schools. In some schools, it is already clear that some teachers are teaching creationism and 'intelligent design' as acceptable alternative theories to evolution. Hong Kong's Secondary School Syllabus is now being re-drafted for publication in September 2009, and this has become a target for fundamentalists, who are seeking to include a provision in the biology syllabus to ensure that students are 'encouraged to explore' explanations other than Darwinian evolution.

The public activities of the fundamentalist right have become unavoidable in Hong Kong, to the extent that Legco Members were recently caused to complain to the media of their behaviour. So it was not surprising that Alva's call struck an immediate response. What was surprising was the speed at which the CMN took off. Within days, an organising body of some 25 men and women formed itself on Facebook. Within two weeks, Alva committed the CMN to a public protest by more than 500 people inside another two weeks. On Feb 15, his project was dramatically fulfilled. After only a few coordinating meetings, the organisers held a press conference at the offices of the Association for the Advancement of Feminism and announced that a march would take place on the 15th.

Which it triumphantly did. The marchers came from all walks of life; men and women, old but mostly young, a few gay but the large majority straight, students, teachers, liberal Christians, atheists, accountants and social workers; this was a very disparate group united only in their belief in the need for civil rights in Hong Kong. All the placards, banners, loudspeakers, arm bands and ribbons were paid for by subscription by the marchers themselves; this was very much self-help in action. The march wended its way right down the central traffic lane of one of the major north-south thoroughfares in Kowloon, and towards its end in on Boundary Street in Prince Edward it attracted a large number of onlookers, many of whom, with the mass of traffic forming at closed cross junctions, could only stand and watch the demonstrators pass by. Outside the unmarked Prince Edward offices of one of the fundamentalist groups, the Society for Truth and Light, the demonstrators shouted slogans and ridiculed (in rather expressive Cantonese terms) the Society for hiding its light under a bushel. Noisy and lively but restrained and decently bahaved, the march was a model of principled civic action.

The march was both preceded and ended by a series of songs (one from the Cantopop group Beyond) and speeches from the organisers as well as a few visiting speakers, including a senior lecturer in Theology at Hong Kong's Baptist University, Mr Chan Sze-chi, who led a prayer to start it off.

Several groups of well wishers marched behind their own banners, including Hong Kong University's Social Work and Social Administration Society and a group named TruthBible.net, an organisation of those recently involved in fighting the censorship imposed on items discussing incest at Hong Kong's Chinese University. These had made their own Youtube film against the fundamentalists and to notify the public about the march.

Virginia Yue, one of the organisers, said that the march was just a beginning for the CMN. 'We intend to organise workshops and talks for people to hear what we have to say,' she told me. 'As a result of the success of today's march, we'll now need a period of consultation amongst ourselves to plan what to do next,' she added.

Her fellow organiser Ken Lam saw that there was much to fight for: 'There is a series of issues currently under discussion in Hong Kong,' he pointed out, 'all of which are attracting campaigns from the fundamentalists, the two principal ones being at the moment the DVO and the proposed changes to the Obscene and Indecent Articles Ordinance. The fundamentalists want to censor the net and we must fight to prevent it. The CMN will join forces with other liberal activists in Hong Kong. The fight is just beginning.'