Zhuang Yisa popped by at a rehearsal of The Stage Club's Never The Sinner which runs from Wednesday to Saturday, and talks to the director and co-stars about play's homoromantic theme.

This is not a review. In fact, I do not know what to make of it. 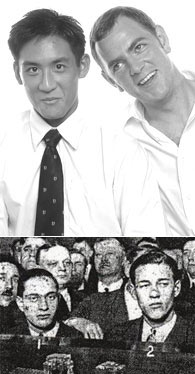 True life tale of Nathan Leopold and Richard Loeb (right) played by newcomer Hansel Tan Shen-Wei and Paul Hannon respectively.
A couple of days ago I attended a rehearsal of The Stage Club. The good people were making preparations for the staging of John Logan's Never The Sinner from 22-25 Feb. John Logan: a gay playwright whose venture into screenwriting has produced unforgettable flicks including Gladiator and The Aviator. I hated both films. But as the saying goes, "hate the sin, never the sinner." In any case, the play fares much better than either screenplay could ever aspire to be, whatever their lengths. The play is a pinprick of character study: concise, rapid in execution and draws just the right amount of blood. It is unfortunate that his later efforts turned out to be sprawling catastrophes of high drama and sweaty blood baths.

Never The Sinner is a play that drew its inspiration from the infamous Leopold and Loeb trial - dubbed "the trial of the Century" by the media of its times. Imagine two boys engaged in some serious business of philosophising, idolising Nietschzian concepts of the uberman and then putting them to practice. They kidnapped a boy and multilated him, simply to prove that they could transcend the constraints of plebian morality. It has a rather disturbing premise; it disturbs because it chills you and makes sense at the same time: if one is indeed of a superior kind, why should one be bound by rules set by the inferiors?

In a post-rehearsal tete-a-tete at a cosy English pub with the Stage people, director Daniel Toyne revealed over a couple of pints that he was compelled to stage Logan's play because of its interesting structure. With the enthusiasm of a precocious young adult who just discovered the theory of relativity, Daniel said he felt inspired by the challenge to put up a play that has does not conform to a chronological sequencing of events: the play is written as a series of short tableaus and each scene bears direct chronological relation with neither the one that preceded it nor the one that follows.

When asked if the presumably straight actors (Paul Hannon and new-comer Hansel Tan) playing the lovers were able to effectively convey the play's homoerotic underpining, Daniel offered a revision of the term in relation to his vision of the play. He preferred, so he said, to call it "homo-romantic." He wanted to downplay the sexual undertones. In his view, the nature of their relationship was mainly transactional: Leopold trading complicity in Loeb's petty criminal ventures (they were involved with petty thefts prior to their committing murder) while the latter traded his companionship with sexual favours. Both actors nodded their heads in agreement while I took a slow draft of my beer, trying to shake off the recurring memory of Paul's boisterous laughter as he mentioned, a while ago, how embarrassing it would be if Hansel's family were to witness their kissing on stage. There was something discomforting about that statement, even in jest; guessed they did not know I love kissing men myself.

I admit I was momentarily confused: pardon me, but I do not really get the concept of what Daniel called the "homo-romantic." Unless of course you are talking about repression in the very same breath. Is it really that difficult to imagine, or rather, to accept an imagination of a sexual undertone between the two boys? In my opinion, and I think Logan himself would have agreed, so much is lost without this imagination. Loeb was openly gay. Leopold himself admitted he would rather hang than be clinically reviewed as a homosexual. So why the impulsion to replace the sexual with just the romantic? There is a reason why the chastity belt was invented in the Dark Ages. What I found problematic was also the way the actors interpreted their characters: they seemed inclined to downplay the sexual tension between Leopold and Loeb, viewing their relation as mainly functional to their philosophical endeavours, dissolving almost entirely any semblance of real human connection between the two. Such a stance is itself contradictory: where does the romance fit in then? I ventured a suggestion that night: Given Nietschzian's ideal of the superman was a conjecture, was the thought of working with caricatures on stage really such a tantalising exploit for these amateur players? Hansel said something about the fluidity of sexuality. (Ha, I thought, you wouldn't know, of course, or would you...?) The night was rife with denials. It was fortunate I only ordered half a pint, for I soon made my way out the pub into fresher air. The stars were beautiful but dim in the dark sky.

The Stage Club is Singapore's oldest amateur theatre company and its roll of honor is impressive - it is extensively long. Past productions have been critically acclaimed by The Flying Inkpot, and reviews have appeared in the Quarterly Literary Review Singapore. A rather friendly institution, The Stage Club provides an avenue for budding dramaturgs and curious observers to experience first-hand the process of stage production. Members can socialise at the same time. How lovely. It would be even better so if they could allow a little queer imagination into their fold, wouldn't it?

As a side thought, I suspect the good people of The Stage Club would have probably judged the movie, Brokeback Mountain, as merely a gay romance, whose inevitable tragic ending no doubt contributes to the ease with which many like them can bring themselves to acknowledge that homosexuals can actually love with deep and genuine feeling.

Fridae.com is the official media of Never the Sinner.