Singapore's best known drag performer, Kumar, speaks to Fridae about his new tell-all stand-up comedy, Not Guilty, from May 12-24.

æ: Hello Kumar! Thank you for accepting this interview with Fridae.

Hello Sylvia! I'm not alone. I just finished rehearsal with Alvin (Tan, director) and Haresh (Sharma, writer) and we're answering this together. 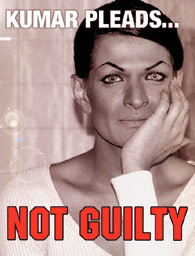 Kumar pleads "Not Guilty" at Jubilee Hall, Raffles Hotel from 12 - 22 May, 8pm. Tickets are available at Sistic at $85, $75, $60 (excluding SISTIC Fee).
æ: Most gay people in Singapore must have seen at least one of your shows in Boom Boom Room known for its notorious drag queens and stand up comics who tease patrons mercilessly.

kumar: They are not notorious. And we don't tease patrons mercilessly.
haresh: Kumar, I don't think she means 'mercilessly' in a bad way.
kumar: Do you?

æ: After being in showbiz for some 13 years, Not Guilty is about your life, childhood, family, being Indian, career and living in Singapore. I know we're going to have to watch the show to get all the salacious details but do tease us a little bit here, what can we expect from it?

kumar: Sorry, we got distracted. A few construction workers came in to build the set.
haresh: Erect the set.
kumar: Not funny.
haresh: Answer the &*^#* question.
kumar: What you can expect is the opposite of notorious drag queens and merciless stand up comics.
alvin: Really ah?
kumar: Maybe got a bit lah. I ad-lib a lot.
haresh: We also got guest stars - X'ho, Chieng Mun, Beatrice Chia and Eleanor Wong.

æ: How did Not Guilty, which is produced by Arts Central, directed by Alvin Tan and written by veteran playwright Haresh Sharma of The Necessary Stage (both of whom directed and wrote the gay play Mardi Gras last year and upcoming sequel Top or Bottom in August 2004), come about?

kumar: Arts Central asked me to do my own show. I asked Alvin and Haresh to help. That's how we all came together.

æ: Only in the very recent years did Singapore see a fair bit of discussion about gay and transsexual issues in the media and in general, especially after PM Goh Chok Tong's most celebrated and cited quote about gays in July 2003: "We are born this way and they are born that way, but they are like you and me," generated a record amount of print space in the local media discussing gay issues. As Boom Boom Room's headline act since 1992, have you seen much change in the attitude in your audience? Do you think they have become more informed and/or accepting of gays and transsexuals?

kumar: Yes, people are more tolerant. They don't beat me up as much as they used to.
haresh: She left out transvestite.
alvin: And transgender.
haresh: And married-but-curious.
kumar: Hullo! It's MY interview!!

æ: On censorship, has there been any significant change in the government's standards since you started more than a decade and now? Your shows have always been risqué and irreverent (much to the audience's pure delight, I'm sure), have you gotten into any trouble with the authorities?

kumar: Sorry we got distracted. We were gossiping about lesbians in Singapore theatre.
haresh: Oi! She's asking about government.
kumar: Alamak, I got missed-call.
alvin: Answer the question!
kumar: What? No, the government is not involved in my Stand-up. No trouble. Everything is vunderful! æ: You'd also revealed that you'd been called nasty names when you were in school as you'd been quite feminine even before you were doing this professionally, how did that affect you and how did you deal with that?

kumar: I made it into my career.
alvin: You took out your feather boa and waved at them.
haresh: Kumar is not feminine in real life.

æ: You've frequently mentioned you family and in particular, your father who is constantly quoted as being a strict caretaker from India, has never approved of your profession after all these years despite your fame and fortune. What keeps you going?

æ: Perhaps you could offer some advice as some might also face rejection from their family members for being gay or transsexual, mostly because relatives might talk and society is "unforgiving."

kumar: Believe in yourself.

æ: So coming back to your new show, the publicity material for the performance said: "Today, Singaporeans are glad that someone like Kumar actually 'made it' here, it says something about our tolerance, our acceptance of the alternative and the daring. But what does it mean to be the torchbearer of the alternative and daring? It is a very lonely and uncertain life, to say the least." What does that mean and what does the show mean to you?

kumar: I don't understand.
alvin: We can't measure tolerance just based on Kumar's 'acceptance.' There's still a lot of discrimination. We shouldn't use one person as a gauge.

æ: Do you think Singaporeans are truly tolerant or perhaps even accepting of the "alternative" although we keep hearing from mainly politicians about Singaporeans being conservative and clinging on this so-called wonderful Asian values that prevents us from accepting people for who they are?

kumar: I don't understand.
haresh: Do you think Singaporeans are conservative?
kumar: Less so.

æ: And one last question, since word's out that you're single…

kumar: I'm going to East Coast now to drown myself.

æ: Would you describe your Prince Charming so that we encourage the RIGHT suitors to stalk you at your show?

kumar: Anything can. Frog also can.

æ: Thanks again Kumar for sharing your thoughts with us and we wish you a very successful performance!