OK to have gays in civil service: singapore PM

Singapore's Prime Minister Goh Chok Tong has for the first time spoken on the issue of homosexuality in an interview with Time Magazine, saying gays will now be allowed to serve in "sensitive positions" in the civil service and that conservative Singaporeans will be more understanding towards gays given time.

In a move that has pleasantly surprised the gay community in Singapore, Prime Minister Goh Chok Tong has for the first time spoken out on the issue of homosexuality, saying that given time, conservative Singaporeans will be more understanding towards gays. 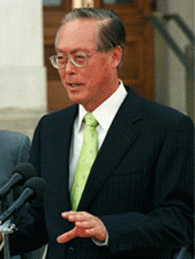 The article, "The Lion In Winter," which appeared in the July 7 issue of Time (Asia) Magazine, has quoted PM Goh as saying: "So let it evolve, and in time the population will understand that some people are born that way."

"We are born this way and they are born that way, but they are like you and me," he said.

He was also quoted as saying that gays will now be allowed to serve in "sensitive positions" in the civil service. Until very recently, men who had declared that they are gay at any time during their compulsory military service or during reservist training will not be posted to combat units nor hold "sensitive" positions.

PM Goh has also admitted in the article, the main thrust of which discusses Singapore's bleak economic climate and its reliance on foreign workers, that the change in policy is inspired at least in part by the desire not to exclude talented foreigners who are gay.

The Prime Minister, who has held office since 1990, added that the government had implemented the policy quietly "to avoid raising the hackles of more-conservative Singaporeans", the magazine reported.

The article also reported that the city-state has not only gay bars and dance clubs hosting gay themed nights, but also seven saunas catering almost exclusively to gay clients.

Dr Vivian Balakrishnan, the Chairman of the Remaking Singapore Committee and also Minister of State for National Development said that Singapore will do "whatever it takes" to attract foreign talent, and one of the ways is to relax repressive government policies previously enforced in the name of social stability.

Meanwhile, pioneer gay activist Alex Au believes that "the time has come to put in a second application for People Like Us" and has put the call out on Signel, a gay news list for GLBT Singaporeans and Singapore residents, to collect 100 names instead of 10 which is officially required to register a society. In 1997, the group's application to form a society was rejected without any explanation given.

Next month, Singapore will see Nation.03 - the loud and spectacular third annual gay pride party being celebrated openly. Some have said this is an indication that Singapore as a country has moved towards being more open and accepting of its GLBT population.

Described by many as the "Mardi Gras of Asia" and "Singapore's coming out party," the event attracted over 1,500 partygoers in 2001, and 2,500 in 2002 locally and from the region including Malaysia, Thailand, Hong Kong, Australia and even the US.